'Twin Souls-Kindred Spirits': Brigid of Kildare and the 'Poverello' of Umbria. 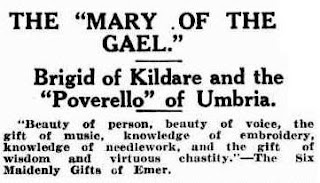 October 4 is the Feast of Saint Francis of Assisi and below is an article syndicated from The Irish Catholic and published in 1930 in an Australian newspaper, which seeks to draw parallels between Italy's 'Poverello' of Umbria and Ireland's 'Mary of the Gael'. The anonymous writer draws on the rich hagiographical traditions surrounding Saint Brigid which s/he describes as 'still more idyllic and wonderful than the “Fioretti” of St. Francis'. Both were 'essentially Saints of the people' and both had poetic souls deeply moved by the wonders of nature. Saint Francis rather fades from the scene though and the author finishes with the story of Sister Dara, a blind member of Brigid's community who is unable to fully appreciate the beauty of creation, but who rejects Saint Brigid's offer to restore her vision. This article is a reminder of the reality that for the past fifteen hundred years the Irish people have honoured Saint Brigid not as a thinly-disguised pagan godess or as an icon of feminism or the environmental movement but as Muire na nGael, the Mary of the Irish. It is also worth noting that the order of friars established by Saint Francis put down deep roots in this country and at the time of the Reformation they kept the memories of the Irish saints alive and themselves contributed many names to the roll of Irish martyrs:

Brigid of Kildare and the 'Poverello' of Umbria.

Because of that which ancient Ireland loved best in womanhood, it reverenced and idealised her who is 'our life, our sweetness, and our hope' — the pure and spotless Mother of God — and took her to its heart, since first Patrick spoke of her in the furze-sweet-air of an Irish meadow at Eastertide.

And because Brigid, the Abbess of Kildare, while she yet walked on earth reminded people of 'our tainted nature's solitary boast,' they called her “The Mary of the Gael.”

“She was a consecrated casket,' says the Book of Lismore, 'for holding Christ's Body and Blood. She was a temple of God. She was simple towards God; compassionate towards the wretched; she was splendid in miracles and marvels; wherefore her name among created things is like unto a dove among the birds, a vine among trees, the sun among stars.

“She is the prophetess of Christ: She is the Queen of the South. She is the Mary of the Gael.”
Great Sympathy.
In truth it is a far cry from the fifth to the twelfth, and more than a bird's flight from the misty, lavender hills and valleys of Umbria to the rich, grassy plains of Kildare, but one ventures to say that, separated by centuries, Brigid of Kildare and the Poverello of Umbria were twin souls — kindred spirits: as much alike as the drops of dew trembling in the calyxes of two flowers of different hue, each tinted by its environment.

The keynote of both lives was an intense humanity— an energetic sympathy with all things living and suffering. St. Francis ministered to lepers and kissed their sores as he would have those of Christ. St. Brigid,- “the milk-maid of the snow-white palm,” who, in her father's house, cared for the milk of twelve cows, always made the butter into twelve equal parts, and one large part, in memory of Christ and His disciples. And the large portion went to the poor. Clothes, food— even her father's sword was not spared— for the needy who came to her in crowds.

Of course, she was reprimanded again and again for her prodigality. But the keys of her charity 'hung at the cincture of God, and He did not fail her,' if we may believe all the old Brigidine legends which have come down to us, and which are still more idyllic and wonderful than the “Fioretti” of St. Francis.

Again, the “Little Poor Man of Assisi” did not retire into a desert after his conversion and his Espousals with his Lady Poverty; neither had Ireland's secondary Patroness hidden herself behind the grille of a contemplated life after she heard the “Sequere Me” of the Gospel.

Real and Ideal.
Both were essentially Saints of the people. “In the heart of Francis,” says an old chronicler, “the whole world found refuge.”

Both worshipped at the shrine of the same great ideal, never forgetting “the actual and the real, which the ideal must grow in.”

St. Francis of the “Joculatores Domini” would “lift the hearts of men and move them to spiritual gladness. But 'not from monastic stalls nor with the careful irresponsibility of the enclosed student' did the Saint and his company address the people. They dwelt amongst them and grappled with the evils under which the people groaned.”

So, too, Brigid, ruling in her famed Abbey of Cill-Dara, kept ever in touch with the spirit of the age. The poor, the rich, the unlettered, the book-learned — layman and cleric— had free access to her, and certainly never left without spiritual profit.

Yet another point of resemblance between the 'Mary of the Gael' and the Troubadour of God was their intense love of Nature.

St. Francis, setting out over the hills which lay beyond, Monte Subicio, with the rose-tinted houses  of Assisi smiling in the Spring sunshine, used to sing in sheer joy of spirit. “He recognised the comradeship of the mountain heights and the deep ravines and the shadowy woods, and of the bare, rugged slopes, so strong and bracing, and yet revealing a tenderness where the wild flowers nestle in the rocky soil.”

Was a Poet.
The sight exhilarated and caused some thing akin to rapture in his soul. For he was a poet, born, like the rest of them, “under a dancing star.” He would conquer the world by love and poetry, believing in the light of his glowing idealism, that 'if men could but be brought to gaze upon the beauty of God and His works, they would be impelled to love and serve Him.”

St. Brigid also had the poet-heart. A slender quiver of sun-gold, the young wrinkled leaves bursting from the bronze grey trunks of the Abbey oaks, a bird's call, were so many levers raising her white thoughts to Him Who is Infinite Beauty.

She pitied poor, blind Sister Dara, who could not behold the sights she saw.

One evening, she came upon the latter seated in the cool garden, telling her beads with eyes closed, a sweet, resigned expression on her face.

The garden was a riot of sweet-smelling flowers and herbs, such as monks and nuns used to cultivate in the olden days. There was not a sound save the lowing of kine in the broad, daisy-starred meadows, the occasional bark of a dog, the rustle of a little breeze that had just sprung up among the tall grasses.

It was the sunset hour. The sky, blue as a robin's egg overhead, flushed faintly rose where the sun was sinking. The familiar hills looked far-off — ethereal.

St. Brigid watched it all in silence, with clasped hands. Then she sat down beside the blind nun and forthwith the pair began to discourse of God. . . . Of God and Mary and the angels and saints, and of the beauty of Heaven, which should never pass away. ... In such holy conversation, time flew. The rose faded from the sky and the stars crept out powdering the velvet vault with bits of broken silver.

Touched Sightless Eyes.
But the nuns did not stir. Like the disciples at Emmaus, “their hearts were burning within them” while they spoke together, and neither knew that so many hours had passed.

And now Dawn stole - with grey feet across the sleeping skies' and the sun came up from behind the mountains. Everything was bathed in light. It was an “heure exouise,” throbbing with the splendors of the new-born day.

St. Brigid felt a wave of pity overcome  her as she looked at her blind companion, knowing all this loveliness was shrouded from her.

Then praying, she touched the sightless eyes with her hand and Dara saw.

For a little while Dara looked, entranced with the sun and the blue Wicklow mountains and the trees and the flowers.

Then she turned to her holy Abbess. “Close my eyes again, dear mother,” she said, “for when the world is so visible to the eyes God is seen less clearly in the soul.”

“Lest His presence in me
Groweth less plain.
Stars, and dawn and sunset
Keep till Paradise,
Here His Face sufficeth
For my sightless eyes.”

De Processu Martyriali is my new blog dedicated to the Irish Martyrs of the Reformation period. Read it here.

Marcella
I am an Irishwoman interested in the lives of our native saints and martyrs. I am not a professional scholar in this field but attempt to keep up with the work of those who are. I am particularly interested in the many obscure Irish saints whose names fill the pages of our Martyrologies.