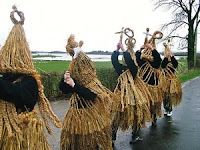 On the eve of Saint Brigid's Day there were a number of customs popular in the rural Irish folk tradition. It is interesting to see that they are making something of a comeback in our own time, presumably encouraged by the wider vogue for New Age neo-paganism. I am saddened to see the way in which the Irish people are embracing Brigid the Celtic goddess at the expense of our Saint Brigid. But it's trendy, it sells books and it fills retreat houses with seekers keen to recapture the goddess from the clutches of the church.

One of the traditions which is being revived is that of Biddy Boys. The Biddy Boys are a group of males who dress up in straw hats and women's clothes and who go around houses carrying a straw doll or Brideog. They demand entrance to the house and entertain the occupants with music and song and then demand a reward. It is all highly ritualized and the details vary from one part of the country to another. Below is an account of how the Biddy Boys have been revived in County Fermanagh:

As peoples minds turn optimistically towards the prospect of lengthening days and greeting the return of the rising Spring season, the Mummers Foundation is organising a popular series of events at Aughakillymaude Mummers Centre this weekend to mark the changing season to come i.e. the 1st of February which is the official start of Spring or what was called a "Quarter Day" in the Celtic Agricultural Calendar.

As with all quarter days e.g. mid summer solstice and Halloween it was customary for customs, festivities and rituals to be enacted and these have remained an unbroken folk tradition in practice in many west of Ireland's rural communities.

One such enduring tradition marking the 1st of February are the distinct strawcraft folk rituals associated with Brigit who symbolically on the same date deposes the goddess of winter thereby marking the beginning of Spring.

Loved by young and old is the fashioning of various Brigit crosses, 3 armed, four armed, diamond and interwomen which occur in prehistoric stone carvings throughout Europe where they are understood to be ancient symbols of the life giving earth mother goddess.

In Fermanagh the emphasis is clearly on the 4 legged crosses and for the children who will be helped making them this weekend it was customary to have these hung over their beds for protection against illness or epidemic disease. On the other hand, the 3 legged crosses (horse cross) is mostly hung in byres symbolically offering protection against lightening and illness.

A more common type of Brigit's cross resembles what is known as the "god eye" design and is a diamond or lozenge made of straw wound on a wooden cross shaped frame.

All crosses, sprinkled with holy water and hung above entrances remained as a sign of protection against fire, lightening and evil spirits couldn't enter a house where it was hung near the door. Also, the crosses were interpreted as a sign of plenty for the whole year.

The straw or rushes which were laid on the threshold on St Brigid's Eve 31st January or at the hearth place on which Brigit would kneel to bless the house was called a Brigit's bed or cradle. After the making of the crosses, the residue was also fashioned into rushlights which were lit in honour of the Saint. Even these were believed to have curative powers. Alternatively, they were put under pillows to ward off disease.

This weekend, the emphasis will also be on the making of straw Brigit dolls called Brideoga as effigies of Saint Brigit. As a folk tradition, popular up to the 1950's in rural Fermanagh bands of young people, dressed in straw masks, white shirts and skirts would carry aloft a straw made doll effigy of Brigit as part of a procession to the doors of their neighbours. Called Biddies or Biddy boys and armed with musical instruments they sought permission to enter and then all would jump inside with a leap reciting a rhyme in the saint's honour. As a reward, the collection for the biddy party would consist of food or money and a Biddy feast would be held that same evening.
Sometimes the straw Biddy doll was made from the last sheaf of the previous harvest, called the Cailleach.

Three days of public strawcraft workshops on this Friday 30th, Saturday 31st and Monday 2nd February will have both schools and the public making both Brideoga and specific Biddy boy straw masks with the diamond figured, "God eyed" cross made as an integral part of the straw mask. A typical rhyme of the Fermanagh Biddies from the 1950's was as follows;

Next Monday night 2nd February starting at 8.30pm sharp the Mummers Foundation have "finally got their woman" to present a lecture and visual demonstration, on the folk craft and rituals practiced to mark St Brigit who personifies the femine face of Celtic spirituality.

Clodagh Doyle, archivist at the National Museum of Country Life in Castlebar, will have, on hand, rarely seen straw artefacts such as the sacred Saint Brigit's straw girdle.

A custom no longer practiced, this eight foot long loop of plaited straw with 3 straw crosses attached was also taken from house to house by young "Biddies" where males were made go through the loop three times whereas, the girls had the plaited loop put over the heads invoking protection.

As if this is not enough, the annual mummers ball is being held this Friday evening marking both the closure of the traditional mumming season, and also marking twenty years of the Aughakillymaude, "actually mad" mummers (founded 1988).

As a special celebration to mark the loosening of winters grip and as a sacrifice to invoke new spring growth there will be a special burning of a twelve foot tall John Barley Corn otherwise known as the infamous Wickerman at 10pm sharp. Made by Gordon Johnson, all twelve foot of the wickerman stuffed with straw will be set alight at 10pm sharp alongside the lighting of the Beacon to symbolically welcome the return of the sun in Spring.

De Processu Martyriali is my new blog dedicated to the Irish Martyrs of the Reformation period. Read it here.

Marcella
I am an Irishwoman interested in the lives of our native saints and martyrs. I am not a professional scholar in this field but attempt to keep up with the work of those who are. I am particularly interested in the many obscure Irish saints whose names fill the pages of our Martyrologies.