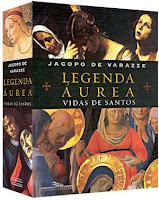 Whilst I have found the study of the lives of those Irish saints like Saint Columbanus who laboured in Europe particularly rewarding, I have also been fascinated by the European dimension to the cult of some Irish saints who were not numbered among the peregrini pro Christo. The following abstract of a recently-published article deals with the Lives of Saint Brigid known in the medieval Iberian peninsula, I only wish I were able to access the full text:

Across the twelve Castilian collections of saints' lives, or santorales, derived in the fourteenth and fifteenth centuries from Jacobus de Voragine's Legenda aurea, there are witnesses of saints, some of them local, whose lives do not appear in the Latin compilation. These saints, purposely taken from other sources and added to the compilations, merit the attention of scholars of medieval Castilian hagiography. One of these saints is Brigit of Kildare (c. 451–525), who follows an active vocation and performs miracles in her role as abbess of a monastery, and whose life (alongside that of Bárbara) garnered sufficient popularity for it to be added to later versions of the Legenda aurea. This contribution discusses the Castilian witnesses of the saint's life (one in Esc MS k–II–12 and one in Esc MS m–II–6), the ways in which they compare and the differences between them, and the extent to which they correspond to the earliest Latin versions, in order to shed light on the ideological representation of Saint Brigit in the medieval Iberian Peninsula. It also includes transcriptions of the Título de santa Brígida and the Vida de señora santa Brígida la qual fue fija de Diptoto e de Broca su madre, both previously unedited accounts of Brigit's life.