The Feast of Saint Brigid in the Scottish Calendars 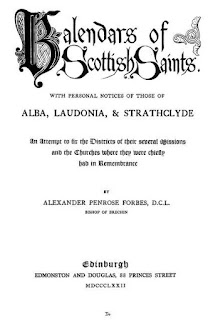 Last year I looked at the entries for the Feast of Saint Brigid in The Martyrology of Oengus, The Martyrology of Donegal and the Martyrology of Christ Church, Dublin. This year I thought it might be interesting to look at the entries in the Scottish calendars as collected by Bishop Forbes. He brings together a wide-ranging collection of sources including a summary of the various Lives, a record from the chronicle of the Scottish philosopher Boece, the lessons for the feast of Saint Brigid from the Aberdeen Breviary, as well as a gazetteer of Scottish sites with Brigidine connections. I note that he starts off by attributing the feast to 11 February, but I assume this is a simple typographical error.

—S. Brigida, "the Mary of Ireland," although her fame on the continent is somewhat eclipsed by the greater reputation of her namesake of Sweden, ranks high in the estimation of her countrymen. With S. Patrick and S. Columba, she takes her place in the " Trias Thaumaturga," as the learned Franciscan Colgan, with a somewhat overbold expression, has named the volume in which he has recorded their lives. As the wise foundress of communities for females, she stands forth in history with a very marked individuality, though the histories that have come down to us are mainly devoted to a narrative of the signs and wonders which God wrought by her. But, to whatever cause it may be referred, there is no doubt that she is one of the most popular of the Celtic saints. The number of churches dedicated to her exceeds the power of our enumeration, while the actual prevalence of the name she bore among the peasantry of Ireland shows how to this day the recollection of her work and the faith in her intercession abide in the minds of that most interesting people.

As to the acts of S. Brigida, the author of the first life is Broganus, surnamed Cloen, who wrote her praises about 525, immediately after her death; of the second, is Cogitosus, or Cogitis (given by Canisius Lectt. Antiq. Tom. V.; by Messingham, Florilegium de Sanctis; by Colgan, Trias, p. 518; by Surius; and bythe Bollandists). Colgan in his preface makes this author to flourish in 650, but Dr. Petrie is correct in making A.D. 800-835 the period within which Cogitosus wrote (Todd's S. Patrick, p. 11, n.). Of the third, Ultanus, bishop in Ardbrecain, who flourished in the sixth century, and died full of years in 655 ; of the fourth, Animosus or Animchodus, bishop in Kildare, who died in 580, or Anmirius, who flourished before the end of the seventh century; of the fifth, Laurence of Durham, A.D. 1160; of the sixth, S. Chilian, or better, Coelanus of Inis Kealtra, who flourished after the beginning of the eighth century.—(See an article on S. Brogan Cloen's Hymn, in the Irish Ecclesiastical Record, 1868, p. 222. See also Dr. Todd's S. Patrick, p. 11.) An abecedarian Hymn in honour of S. Bridget from the Library at Basle is given in the preface of the Arbuthnott Missal, p. xlii. For later lives of S. Brigida, see Sir T. D. Hardy's Catalogue, vol. i. pp. 105-116.

Boece's account is as follows (Bellenden's translation, ed. 1821, vol. i. p. 73): — "And at this time Brigida, a holy virgin, havand bot xiv. yeris in all, dedicat hir virginitie to God ; and was confirmed by the Bischop of the Ilis in the Ile of Man. She bare ane leddern belt over ane quhit kertol, with ane vale over her shoulderis ; and was holden in grit reverence in Scotland and Ireland for her singular haliness, of whom are many kirks in this region. She deceased in the xviii. yeir of Conrannus, and was buryet in Ireland, in ane town namit Dune. Howbeit, some of the Scottis haldis that scholyis in Abirnethy."

The Lections in the Breviary of Aberdeen, some of which are abbreviated from the Life by Cogitosus (Colgan, Trias Thaum., p. 618), are as follows :—Thus the holy Brigida, whom God foreknew and predestinated into his own likeness, sprung from a good and prudent Scotic stock, having for father Dubthacus and for mother Brocca, from her very youth profited in the study of good things. For this young woman, the elect of God, full of sobriety and prudence, ever advanced towards better things. Sent by her mother to collect the butter made from the milk of the cows, as other women do, she gave it all to the poor.

And when she would have given back the rest of the fruit of the cows, the fear of God kindly turned her to the Lord, and God, for his virgin, amply restored the butter. At last, when her parents wished to give her in marriage, she vowed chastity, and in the presence of a most holy bishop, as she made her vow, she touched the wooden pillar on which the altar rested with her hand. In memory of the ancient virtue, up to the present time this wood remains as it were green, or as if it had not been cut and stripped of its bark, it flourishes in its roots and heals many impotent people.

The holy and religious Brigida, seeing that the time of her espousals was coming near, asked the Lord to send her some deformity, so as to avoid the importunity of her parents, whereupon one of her eyes burst with a noise and melted in her head. Therefore, having received the holy veil, Brigida with other sacred veiled virgins remained in the city Medi, where the Lord, at her prayer, vouchsafed to perform many miracles: She healed a stranger by name Marcus ; she supplied beer out of one barrel to eighteen churches, which sufficed from Maunday-Thursday to the end of Easter.

On a leprous woman asking for milk, there being none at hand, she gave her cold water, but the water was turned into milk, and when she had drunk it the young woman was healed. Then she cured a leper, and gave sight to ten blind men. It happened that, for an urgent cause making a journey, she slipped at a ford and cut her head, and with the blood that flowed therefrom two dumb women recovered their speech. After this a precious vessel of the king's, slipping from the hand of a rude man, was broken; and, that he might not be punished, it was restored to its perfection by Brigida.

When a leprous woman denied her some apples, by the prayers of Brigida the orchard dried up from the roots, and the apples being left inside disappeared. Then, being on a journey in a chariot, she saw a poor man with his family with great fatigue carrying wood, and she, pitying him, gave him her horses, while she with her maidens sat by the way. Then said she, " Dig under that turf, that water may spring up for the travellers," which being done, straightway a fountain burst forth from it.

No sooner was this done, than a chief passing by gave his horses to Brigida. As Easter day approached, Brigida said to her maidens, "Who shall wash our infirm sisters?" And when they all, like heifers, refused, Brigida put her hands into the water toward them and cured them of their diseases, of whom one was paralytic, another possessed of devils, and a third leprous.

While St. Brigida was staying in a neighbour's house it happened that all had gone out, and there came certain persons begging bread. Brigida, looking round, said to a paralytic and dumb boy who lay near her, of whose condition, however, she was ignorant, " Boy, thou knowest where are the keys." And he answered, " I know." Whereupon Brigida said, " Run and minister to them," which was accordingly done. In one house she healed twelve sick folks.

In a great council, a certain woman affiliated her child upon a bishop. When blessed Brigida had signed her with the sign of the cross, she shook from the top of her head to the sole of her foot, and still remained silent. Brigida said, " Who is thy father, little infant?" He answered, " The bishop is not my father ; but a certain man at the foot of the council, base and vile." In those days a certain beggar came to blessed Brigida craving alms. Brigida said, "Take a cow and lead it away." To which she answered, " The cow will do me no good. The robbers will come and steal it away from me."

Brigida said, " Take this girdle, steep it in water, sprinkle the sick, and they shall be healed." She took it, received great gains from the sick whom she cured, and distributed it to Christ's poor ones. In time of a famine Brigida went to Bishop Ybarus to beg fruits from him. It was the time of Lent, and he had no other bread, so he placed before her a hard stone with lard, which she and the bishop ate. But two of her maidens, wishing to eat flesh, hid it, and it was straightway turned into two serpents; whereupon they were severely rebuked by Brigida in the presence of the bishop, but on their repentance, after prayer, the serpents were turned into bread. After many such wonderful miracles Brigida migrated to the Lord.

The cultus of this great saint in Scotland was very extensive. The Pictish Chronicle, which, probably written by the Culdees of Brechin between the years 971 and 995, comes down to us in a transcript made by Robert de Populton in the early part of the fourteenth century, informs us that "Necton morbet filius Erip(the Nectan of Venerable Bede), xxiiij regnavit. Tertio anno regni ejus Darlugdach abbatissa Cilledara de Hibernia exulat pro Christo ad Britanniam. Secundo anno adventus sui immolavit Nectonius Aburnethige Deo et Sancte Brigide, presente Darlugdach que cantavit alleluia super istam hostiam. Optulit igitur Nectonius magnus filius Wirp, rex omnium provinciarum Pictorum, Apurnethige Sancte Brigide, usque ad diem judicii, cum suis finibus que posite sunt a lapide in Apurfeirt juxta Ceirfuill, id est Lethfoss et inde in Altum usque ad Athan." The cause of the offering was that when Necton was driven into Ireland he besought S. Brigida to pray God for him. She did so, and said — " If thou arrivest in thy country, God will have mercy upon thee. Thou shalt possess the kingdom of the Picts in peace.''

The latest church I find dedicated to S. Brigid is the new church of Dunnottar, consecrated in 1394. — (Jervise's Memorials of Angus, p. 448.)

The church of S. Brigida in the province of Athol was reputed famous for miracles, and a portion of her relics was kept with great veneration in the monastery of regular canons at Abernethy.—(Alban Butler, quoting Major de Gestis Scotorum, 1. 2, c. 14.)