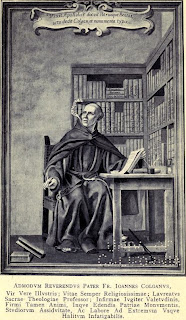 Below is a useful summary from Archbishop John Healy of the Lives of Saint Brigid  published by the 17th-century hagiologist, Father John Colgan:

In connection with St. Brigid and the School of Kildare, we may here make brief reference to the celebrated scholars who have compiled her biography.

The first of the six Lives printed by the learned Father John Colgan is the metrical Hymn of the Saint commonly attributed to St. Brogan Cloen of Rostuirc in the Diocese of Ossory. The original Hymn is written in the Irish language; Colgan also gives a Latin translation. This Irish original has been preserved in the Liber Hymnorum, and also in a MS. in Trinity College of very recent date. The following Irish preface is prefixed to the Hymn in the MS. of St. Isidore's, now in Merchants' Quay, Dublin.

“The place where this hymn was composed was Sliabh Bladhma (Slieve Bloom), or Cluain Mor Moedhog. The author was Brogan Cloen. The time (to which it refers) was when Lughaidh, son of Laeghaire, was king of Ireland and Ailil, son of Dunlang, king of Leinster. The cause of writing it- viz , ''Ultan of Ardbraccan, tutor of Brogan, requested him to narrate the miracles of Brigid in suitable poetical language, for Ultan had collected all the miracles of Brigid for him."

We gather from this interesting statement that Saint Ultan of Ardbraeccan, who was an uncle on the mother's side of St. Brigid, collected the materials for this poem. It is true St Ultan did not die until the year a.d. 656 or 657, but if he were then, as is stated in the Martyrology of Donegal, 189 years of age he might well have been the uncle and contemporary of the Virgin Saint. He was a very celebrated man, and was especially remarkable for his love of poor orphans, for he often had no less than 200 of them together, whom he used to feed with his own hands. He was also very mortified in his life, sleeping on the bare board in his narrow cell, and bathing his body in cold water in the sharpest blasts of the wintry wind. " It was he," says the same authority, " that collected the miracles of Brigid in one book, and gave them to his disciple Brogan to render them into verse''.

St Brogan Cloen himself lived, it seems, for some time in the monastery near Slieve Bloom, founded by St. Molua, and afterwards in that of Clonmore, in the barony of Bantry, County Wexford, which was founded by St. Aidan about the year A.D. 620. The scholiast doubts whether he composed this hymn while at Slieve Bloom or Clonmore ; so we may fairly suppose that it was composed sometime between A.D. 620 and 657, when St. Ultan died...

The hymn consists of 212 lines or 53 stanzas of four lines each. It describes at great length the virtues and miracles of St Brigid, but is unhappily too meagre in historical facts. The writer assumes that because her history was well known in his own time, it would continue to be equally well known to future generations.

There is also in the Book of Hymns published by Dr. Todd, what seems to be a fragment of an ancient Latin hymn in praise of St. Brigid. The preface to this Hymn attributes it either to St. Ninnidh of the Clean Hand, Brigid's chaplain, or to St. Fiacc of Sleibte, or to St. Ultan of Ardbraccan. This last conjecture, however, seems to arise from the statement that "Ultan collected the miracles of St. Brigid into one book. It was an abecedarian hymn originally, and is undoubtedly a very ancient composition. At present it consists of four stanzas of four lines each, having a rhyme or assonance in the middle and at the end of each line, which properly should consist of sixteen syllables. The first line at present is:

and notwithstanding the statement of the scholiast that the hymn was abecedarian, these words—Christus in nostra insula—appear to have been always regarded as the beginning of the hymn. In the eighth line Brigid is declared to be " Mariae sanctae similem," an expression which may have given origin to the saying that Brigid was the " Mary of the Irish." The following passage from the Leabhar Breac gives a glowing eulogy of St. Brigid, and formally calls her" the " Mary of the Gaedhil."

"There was not in the world one of more bashfulness and modesty than this holy virgin. She never washed her hands, or her feet, or head before men. She never looked a man in the face. She never spoke without blushing. She was abstinent, unblemished, fond of prayer, patient, rejoicing in God's commands, benevolent, humble, forgiving, charitable. She was a consecrated shrine for the preservation of the Body of Christ. She was a temple of God. Her heart and mind were the throne of the Holy Spirit;she was meek before God. She was distressed with the miserable. She was bright in miracles. And hence in things created her type is the Dove among birds, the Vine amongst trees, and the Sun above the stars."

This beautiful eulogy concludes by declaring that Brigid is " The Queen of the South. She is the Mary of the Gaedhil."

The Second Life printed by Colgan, is the celebrated work of Cogitosus. He tells us himself that he was a monk of Kildare, and that he wrote in obedience to the wishes of the community, not of his own presumptuous notion. In the last chapter he asks a prayer, " Pro me Cogitoso culpabili,'' but it is evident when he calls himself a 'nepos.' that he does not mean that he was the 'nepos' of St. Brigid, as some have fancied. In his humility he uses the word in its secondary classical sense, and calls himself a sinful spendthrift of God's time and of God's graces. The use of the word 'nepos,' therefore, furnishes no argument that this Life was written shortly after the death of St. Brigid. On the other hand, there is nothing in this Life that, as Basnage insinuates, ' smells of a later age' than the eighth or the beginning of the ninth century. As we have already observed, the description which Cogitosus gives of the great Church of Kildare, of its wealth, of the tomb of its founders, and the inviolable character of the city, clearly proves that it must have been written earlier than the ravages of the Danes. There are, however, some expressions that show it was written a considerable time after the decease of St. Brigid and St. Conlaeth. The writer speaks of 'the prosperous succession ' of prelates and abbesses who ruled in the sacred city, ritu perpetuo, a strong expression, which points to a long series of successors in Kildare.

We need make no special reference to the other four anonymous Lives printed by Colgan. The Third is attributed, but without any proof, to St. Ultan; the Fourth is probably the work of a monk called Animosus, of whom nothing else is known ; the Fifth was written by an Englishman, Laurence of Durham, in the twelfth century. The Sixth, like the First Life, is a poetic work in Latin, which Colgan got from Monte Cassino, and which the MS. itself attributes to Chilien, or, perhaps, more properly, Coelan, a monk of Iniscaltra, or the Holy Island, in Lough Derg, who probably flourished in the eighth century. We know that many monks from Holy Island went abroad in the ninth and tenth centuries to preach the Gospel, and, doubtless, one of them carried this MS. with him either to Bobbio, or some other Benedictine Monastery, whence it might easily find its way to Monte Cassino. The prologue of the poem is attributed to Donatus, an Irish prelate in Tuscany, during the ninth century. This also helps to explain how the Irish-born prelate would get this volume from some of his countrymen abroad, and also write a prologue to this poetic life of the Queen of Ireland's virgin saints.