Adest Dies Leticie - This is the Day of Rejoicing 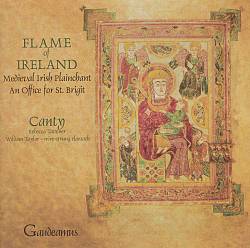 This is a hymn for the feast of Saint Brigid from a 15th-century manuscript of her festal Sarum Office, preserved at Trinity College, Dublin. The hymn celebrates the incident of the wood made to spring back to life at the touch of Saint Brigid, which the Martyrology of Ado and the Roman Martyrology record.

The day of rejoicing is come,
In which the holy virgin Brigid
From the shadows of misery
passes to the realms of light.
From a modest station
She strove to serve God,
Mighty in the gift of purity
She was pleasing unto the Bridegroom on high.
As a sign of her virtue
The wood of the altar which had dried out
By a touch of the hand of the virgin
Was at once made green again.
This is Ireland's laurel
Whose green verdure never fades,
Filled with loving kindness
She fails none who entreat her aid.
For ages without end
To God alone be glory,
Who by the prayers of such a virgin
Leads us to the Kingdom of Heaven.