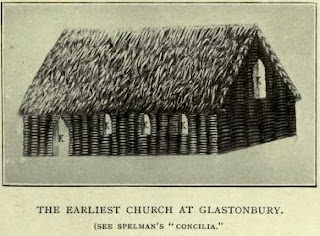 It is interesting to reflect that the cult of Saint Brigid was not confined to Ireland, but was known in other parts of these islands, not to mention continental Europe. One of the most intriguing claims is made by the English monastic site of Glastonbury, where it is held that Saint Brigid spent some time at a place called Beckery. Indeed, she is not the only Irish saint with whom Glastonbury claims a link, for medieval sources also lay out an alternative chronology for Saint Patrick and identify more than one saint of this name. The third of Ireland's trinity of patrons, Columcille, was claimed as a visitor to Glastonbury as well. The idea of Ireland having this triple patronage developed after the Norman invasion, when the remains of these three great saints were supposedly translated to Downpatrick in 1185. This allowed the Norman conqueror of Ulster, John de Courcy, to attempt to associate his regime with the patronage of the native saints. There is also a less well-known Irish saint, Indract, whose story has become entwined with that of Glastonbury too. Below is an account of Saint Brigid's association with this famous English site, taken from a mid-14th century source, The Chronicle of Glastonbury Abbey by John of Glastonbury. This work gives a history of Glastonbury Abbey from the earliest times until the author's own day and draws upon many other sources, some of which are now lost. Particularly interesting is the description of Saint Brigid's relics which were venerated there in the pre-Reformation period:

Saint Bridget flourished at the end of the life of the greater Patrick, with whom we dealt earlier. She survived him, as Gildas writes, by sixty years, and she came to Glastonbury about AD 488. Saint Kolumkilla was born four years before the death of Saint Brigid and came to Glastonbury later, about AD 504. These saints, indeed, frequented the spot, along with some of the Irish nobility because of the venerable relics of their patron Patrick. Saint Bridget made a stay of several years on an island near Glastonbury, called Beckery or Little Ireland, where there was an oratory consecrated in honour of Saint Mary Magdalene. She left there certain signs of her presence - her wallet, collar, bell and weaving implements, which are exhibited and honoured there because of her holy memory - and she returned to Ireland, where, not much later, she rested in the Lord and was buried in the city of Down. The chapel on that island [i.e. Beckery] is now dedicated in honour of Saint Bridget; on its side there is an opening through which, according to the belief of the common folk, anyone who passes will receive forgiveness of all his sins.

J.P.Carley and D. Townsend, The Chronicle of Glastonbury Abbey - An Edition, Translation and Study of John of Glastonbury's Cronica sive Antiquitates Glastoniensis (Boydell and Brewer, 1985), 67.

A couple of points can be made about this account. First, the placename Beckery has been the subject of some discussion among scholars. The received wisdom was that the name was a rare survival of an Irish placename in England, Beckery being derived from Becc Eriu, latinized as Parva Hibernia i.e. Little Ireland. One scholar pointed out that the name Beckery was also used in the Middle Ages for a a small island in Wexford Harbour. However, in a paper on Saint Patrick and Glastonbury, HPR Finberg suggested that it was a purely English placename meaning 'beekeepers island' derived from beocere= beekeeper and ig or ieg = island. Secondly, the information on Saint Brigid in the Glastonbury Abbey Chronicle seems to derive from the medieval monastic writer William of Malmesbury's Chronicle of the Kings of England. In his work William states that he does not know whether Saint Brigid actually died at Glastonbury but he is certain that she visited and left behind her relics. Some 20th-century scholars have supported both the idea of her visit and the existence of the relics. The reference to the date of her death in the Glastonbury Chronicle is to the Historia Britonum which was often attributed to Gildas in the Middle Ages. It says that Saint Brigid died forty years after Saint Patrick. However, John of Glastonbury's claim that she was then buried in the 'city of Down' i.e. Downpatrick, would contradict the testimony of Saint Brigid's biographer, Cogitosus, who describes her tomb in the church at Kildare. The translation of her relics did not take place until the late 12th-century.

Glastonbury is now a stronghold of the neo-pagan movement and much of the information available online reflects the usual goddesses and druids bunkum. This page, however, formerly at the website of the Christian shrine of Our Lady of Glastonbury,* concludes 'For us the unanswered question is: did St. Brigid come to Glastonbury and spend perhaps two years in prayer in an oratory at Beckery or Brideshay, before founding her famous monastery in Kildare? Legend suggests it; history has yet to prove it'. A good question indeed.

* This page now has to be recovered through the Internet Archive's Wayback Machine and may take a moment to load.