The Church at Kildare - a lost reality? 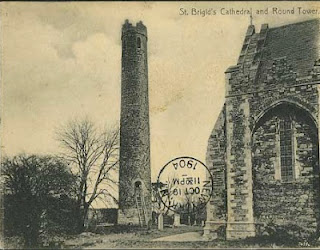 The description of the church of Saint Brigid at Kildare by her biographer Cogitosus has given rise to some scholarly controversy. In the past it has been suggested that the whole thing is no more than a literary conceit on the part of the hagiographer. In the 1960s, for example, one scholar argued that the description of the church at Kildare was a 'pure figment of the imagination' inspired by a desire to imitate Adamanan's description of the Anastasis Rotunda in Jerusalem in his work, De Locis Sanctis. I have been reading a recent paper, however, which accepts the historical reality of the church as described by Cogitosus and which seeks to explain it against the backdrop of seventh-century ecclesiastical politics. The author argues that the architectural peculiarities of Kildare can be explained by imitatio Romae, a self-conscious desire on the part of this Irish foundation to ape the features of Roman churches. Here is some of the evidence she offers:

Why does Kildare diverge from the other Irish churches of its day to accommodate a longitudinal barrier down the centre of its nave to separate worshippers by gender, even to the extent of foregoing a western door? The answer may be that Kildare was copying a foreign precedent, not from Africa or Spain as proposed by Radford and Thomas, but rather from Rome. In the Roman ordines, particularly in the seventh-century Ordo I, there are consistent parallelisms of layout and function with the approximately synchronous church at Kildare. In the ordines, the congregation in the nave was separated by sex with the men to the south and the women to the north, as elsewhere in the early church....

...Additional features of Kildare may demonstrate Roman influence. At St Peter's it is unlikely that the faithful used the central doorway ; instead they used lateral doors, two on the north for women and two on the south for men. Kildare with its single gender-specific doorways in the north and south walls of the nave, may provide a scaled-down version of this aspect of St Peter's. The draperies at Kildare were also echoed at Rome as elsewhere in the early church... Whatever the placement and function of the draperies of Kildare's chancel barrier, both the determination to purchase them and Cogitosus's decision to describe them may suggest knowledge of Roman practice and the prestige that costly fabrics could confer.

The evidence suggests that the community of Kildare were aware both of Ordo Romanus I and of specific Roman structures, possibly through pilgrims' reports, and that they were willing and able to modify received ideas to fit the more modest scale and liturgical needs of an Irish monastic church. No particular Roman church is imitated in all particulars, but Roman precedent in general was applied effectively and with probable intent.

Why would Kildare, in reconstructing its monastic church in the mid-seventh century, depart from generalized norms of Irish church construction in order to follow Rome? The answer may lie in contemporary ecclesiastical politics. In the Prologue to his Life of Brigit, Cogitosus claims for Kildare a position of authority in Ireland 'It is the head of almost all the Irish churches with supremacy over all the monasteries of the Irish and its paruchia extends over the whole land of Ireland, reaching from sea to sea'. This is more a statement of ambition than of fact, as Kildare's claims to authority were eventually overpowered by those of Armagh. By the mid-seventh century, if current concensus is accurate in dating the Liber Angeli, Armagh was indentifying itself with Rome in that text in a bid for metropolitan status, a concept in itself profoundly Roman... The deliberate imitatio Romae of its splendid new monastic church, in combination with the claims to ecclesiastical power and advancement of the cult of its founder saint by Cogitosus's Vita, may be the otherwise silenced voice of Kildare in a climate of severe competition and exclusion.. Far from being a figment of scholarly imagination, the Romanitas of the monastic church at Kildare as described by Cogitosus may well be a stratagem in the realpolitik of the internal struggles of the church and the dynastic rivalries of mid-seventh century Ireland.