The Feast of Saint Brigid in the Martyrology of Donegal 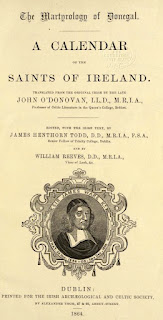 BRIGHIT, Virgin, abbess of Cill-dara. She was of the race of Eochaidh Finnfuathairt, son of Feidhlimidh Reachtmhar, son of Tuathal Teachtmhar, monarch of Erinn. Broiccseach, daughter of Dallbronach, son of Aedh Meamhair, was her mother, and she was the sister of Ultan of Ard-Breccain, and it was Ultan that collected the virtues and miracles of Brighit together, and who commanded his disciple Brogan to put them into poetry, as is evident in the Book of Hymns, i.e., 'The victorious Brighit did not love,&c'.

When Moling was returning from the king of Erinn, after obtaining the remission of the Borumha from Fionnachta, king of Erinn, the people of the king were seized with regret, and they followed him to kill him. When Moling saw this he had recourse to the protection of the saints, and he implored Brighit first, and said :'Brighit, bless our path,&c.'

A very ancient old book of vellum, in which is found the Martyrology of Maelruain of Tamhlacht and the saints of the same name, and the names of many of the mothers of the saints, states that Brighit was following the manners and the life which the holy Mary, mother of Jesus had.

It was this Brighit, too, that did not take her mind or her attention from the Lord for the space of one hour at any time, but was constantly mentioning Him, and ever constantly thinking of Him, as is evident in her own life, and also in the life of Saint Brenainn, bishop of Cluain-fearta. She was very hospitable and very charitable to guests and to needy people. She was humble, and attended to the herding of sheep and early rising, as her life proves, and as Cuimin of Coindeire states in the poem whose beginning is, 'Patrick of the fort of Macha loved, &c'. Thus he says - :

The blessed Brighit loved
Constant piety, which was not prescribed;
Sheep-herding and early rising
Hospitality towards men of virtues.

She spent indeed 74 years diligently serving the Lord, performing signs and miracles, curing every disease, and sickness in general, as is evident in her own life, until she yielded her spirit, after having completed seventy-four years, as we have said before, A.D. 525, and she was buried at Dun, in one tomb with Patrick, where Colum Cille was afterwards interred. The life of Ciaran of Cluain states, chap. 47, that the Order of Brighit was [one] of the eight Orders that were in Erinn.