The Feast of Saint Brigid in the Martyrology of Oengus 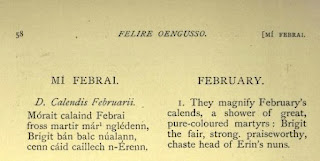 The Martyrology of Oengus records some of the miraculous incidents from Saint Brigid's life in the notes appended to the calendar. The calendar entry reads:

Brigit's three eighths, to wit, her birth on the eighth (of the month) her veil on the eighteenth, her death on the twenty-eighth.

The white-one from Liffey of the slopes, daughter of Dubthach of Druim derg:
to-morrow she goes quickly, so that from her hand is Patrick's bequest.

Eight bishops came to Brigit out of Hui Briuin Cualann, i.e. From Telach na n-epscop to Loch Lemnachta beside Kildare on the north. Brigit asked her cook, Blathnait, whether she had food for the bishops. Dixit ilia non. Brigit was ashamed: so the angel told her to milk the cows again. The cows were milked and they filled the tubs, and they would have filled all the vessels in Leinster, so that the milk went over the vessels and made a lake thereof, unde Loch Lemnachta 'New-milk Lough' dicitur.

A young cleric of the community of Ferns, a foster-son of Brigit's, used to come to her with wishes. He was with her in the refectory, to partake of food. Once after coming to communion she strikes a clapper.
"Well, young cleric there," says Brigit, "hast thou a soulfriend?"
"I have," replied the young cleric.
" Let us sing his requiem," says Brigit, "for he has died. I saw when half thy portion had gone, that thy quota was put into thy trunk, and thou without any head on thee, for thy soulfriend died, and anyone without a soulfriend is a body without a head ; and eat no more till thou gettest a soulfriend."

Amra Plea etc. a convent of Brigit's which is on the brink of the sea of Wight, or the Tyrrhene (sea), and its Rule is that of Brigit's community. Et sic factum est. Brigit despatched seven persons to learn the Rule of Peter and Paul, for God did not determine that she should go. And they brought not the Rule. So she sent eastward a third time, together with her blind boy, for everything he used to hear he remembered. When they reached the sea of Wight, a storm fell upon them, so they let down their anchor, which stuck on the peak of the oratory. They cast a lot inter se as to going down, and it fell to the blind (boy). He loosed the anchor, et stetit there to the end of a year, learning the Rule, till the rest of the party came to him from Rome, and a storm fell upon them again in the same place, so they let down an anchor, and the blind boy came up from below with the Rule of Plea and with a beautiful bell, and it is the Rule of Plea that abides to-day.

Now Brigit was fain to have the orders of penitence conferred upon her ; so she went to Bri Eile, accompanied by seven nuns, since she had heard that bishop Mel was there. When they arrived, bishop Mel was not there, but had gone into the district of the Hui Neill. So she fared forth on the morrow with Mac caille before her as a guide to Moin Faithnig. Brigit wrought so that the bog became a smooth flowery plain for them. When they drew nigh the place wherein bishop Mel was biding Brigit told Mac caille that she would take a veil on her head so that she might not come unveiled to the clerics; and that may be the veil that is commemorated here. Now after reaching the clerics a fiery column flamed from her head to the ridge of the church. Said Mac caille : " This is the famous nun of Leinster, even Brigit." "My welcome to her," quoth bishop Mel: "'tis I," quoth he, "that prophesied her in her mother's womb, and 'tis I that will confer the orders upon her."

Once upon a time bishop Mel came to Dubthach's house and saw Dubthach's wife in grief. So the bishop asked, " What is the matter with the woman?" " Cause of grief I have," she says, "for dearer than I am to Dubthach is the bondmaid who is washing you." "Thou hast good reason," says bishop Mel, "for thy seed will serve the seed of the bondmaid."

So long as he was reading out the orders, thus was Brigit, with the foot of the altar in her hand; and seven churches were burnt with that foot (in one of them); and it was not burnt, sed etc. Dicunt alii that in Fir tulach that church was, as bishop Mel declared :

Beloved and little the month of dear February, which comprises for us those festivals,
Brigit's festival .... Finntain's festival which I have chosen.
Save great Mary, good her fame, Mother of the Lord Jesus,
no ... under heaven has been found more wondrous than bright white Brigit.