The Mantle of Saint Brigid at Bruges 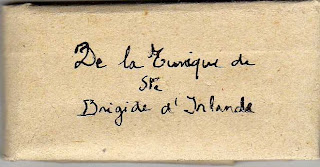 Probably the most famous of the European relics of Saint Brigid is that of her Mantle in the Belgian city of Bruges. Here is a 19th-century writer's account of it:

The Relic of a Portion of the Mantle of St. Brigid, the Mary of Erin

I regret much that my account of this precious relic is but meagre; still I can testify as to its real presence in Bruges.

The relic which is kept in the Church of St. Saviour, now the Cathedral of Bruges, is to be found in a chapel in the south aisle, on the Gospel side of the High Altar. In a niche in the wall is a small frame with folding doors in which is placed the relic. It appeared to me, when I examined it some years ago, to be of woollen material with silver threads running through it. Others say it is of velvet; the colour is brown. In the Church of St. Donatus, formerly the Cathedral of Bruges, but utterly destroyed by the Vandals of the Revolution, was found a leaden or zinc plate, on which is written a short account of the life of Gunilda. This princess was the daughter of Godwin, Count of Essex, Sussex, and Kent, and sister of Harold the last Saxon king of England. After the battle of Hastings she and her mother fled from Exeter in ships of Bruges, and found shelter in Flanders. She died here in 1087, leaving a magnificent set of jewels to the Chapter of St. Donatus, together with this relic of St. Brigid. Her tomb in the cloisters of the church was violated by the French Republicans in 1804, when this plate was found under the head of the princess, and fortunately saved from destruction. The plate is kept in the sacristy of St. Saviour. The most ancient account we have, except the one on the leaden plate, of the relic, is to be found in an inventory of relics preserved in the Church of St. Donatus, and written about the year 1300. This inventory is now printed and can be seen in Le Beffroi, vol. iii., pp. 199 to 202. In the fourteenth century this tunic was set in a reliquary of precious stuff having the form of a mantle. This cloak reliquary is mentioned in an inventory of objects given by the Chapter of St. Donatus to the care of Giles of Ghent, Cure and Sacristan of this church, the 8th of August, 1347, under this designation ' Item Mantellum Beate Brigide ' (sic.) In 1866 the relic was extracted and placed in its present reliquary.

William Brady, 'Some Account of the Relics of the Holy Blood and the Mantle of St. Brigid Kept at Bruges' in The Irish Ecclesiastical Record, Volume IX, 1888, 605.