Some posts originally made in 2009 on my former blog describe the revival in the the tradition of making Saint Brigid's crosses:

SUNDAY next, February 1, marks Lá Fhéile Bríde or St. Brigid’s Day. Keeping up the tradition of making St Brigid’s crosses, classes were held in the Northside Centre on Tuesday last, with another this Thursday (7-9pm).

There are many traditions and customs associated with this feast-day, as Clodagh Doyle, curator at the National Museum of Ireland - Country Life, Turlough Park, Castlebar explains: “St. Brigid promised fine weather from her feast day onwards. Spring, the season of hope and new life, brought better weather, longer days. With it came new life on the farm and new growth on the land.

“On St. Brigid’s Eve, a festive meal of potatoes and butter was eaten and all of the family made special crosses in honour of the saint. They sought St. Brigid’s protection for the fertility of the household, farm and land and to safeguard them from illness and disease.

“In parts of Connacht, people would carry a large straw belt (a Crios Bríde) through which the inhabitants passed while saying a prayer to St. Brigid, in the hope of gaining the saint’s protection from illness during the coming year.

“Throughout Ireland, there are many holy wells dedicated to St. Brigid and it was traditional to visit these either the evening before or on her feast day. Water obtained at this time, was believed to be particularly blessed.

“Sometimes a piece of cloth or ribbon (Brat Bríde or Ribín Bríde) was left outside on the windowsill or near the door for the night. It was believed it would be touched by St. Brigid on her travels and thus be endowed with the power to ward off illness and pain in both humans and animals. For the coming year, it was kept safely and used for healing, or incorporated into clothing so as to offer protection to the wearer. In many parts of Ireland Biddy Boys‚ (or girls) went from house to house with Biddy, an effigy of the saint, often a straw doll, collecting money and food for a party in her honour.

“The St. Brigid’s cross, pinned up above the front door or in the kitchen, is still a familiar feature in many Irish homes. The making of crosses - in a variety of styles - biddy-boys, brídeoga and visiting holy wells are all traditionally associated with the celebration of the feast of St. Brigid.

“The most recognisable is the four-armed St. Brigid’s Cross, popularised by its use as an emblem for RTÉ television since it started broadcasting in 1961. This style was favoured in the north of Ireland. Regional styles and variety existed throughout Ireland and the Irish Folklife Collection, located in the National Museum of Ireland - Country Life near Castlebar has an example of most of these.

“Although straw, rushes and reeds were most common, grass, hay, wood, goose quills, wire and fabric were also used to form crosses. Whatever material was used, it was sprinkled with holy water beforehand and a prayer to welcome the saint into the home was often recited.

“Traditional designs were diamond, interlaced or wheel-shaped and could have two, three or four arms. In some areas of the west coast, two strips of wood were tied together to form a simple cross.”

In this report from County Donegal, making crosses is also a communal event:

St. Brigid’s Night which takes place this Saturday, January 29th has traditionally been celebrated with greater enthusiasm and devotion in the Gaeltacht areas along the western seaboard than in many inland areas where the tradition of making St. Brigid’s crosses is fast dying out except in select areas.

The art of making crosses is still alive and well in many areas of Donegal, however, and none more so than in the Gaeltacht Lar and in the Kilcar, Carrick and Glencolumbkille areas of the County where expert cross makers still teach the youth this ancient craft.

One area rich in this tradition is Edeninfagh where the annual cross-making night takes place in Cormac Dinny Quinn’s Glen Tavern at Greenans on Saturday night, commencing at 9.p.m.....

“Cross-making is still very much alive and we have some great exponents of the art. They will all be coming along as usual on Sunday night and a very pleasing feature in latter years was the many young people we had coming along to learn”, commented John Byrne....

“We will be having the usual meal of “Boxty” available free on Saturday night for those who attend and the Campbells will be on hand to provide the traditional music associated with this, our annual celebration of St. Brigid”, said Mary Quinn of the Glen Tavern.

This picture below shows parishioners making crosses after a service at St Brigid's well at Liscannor, County Clare. 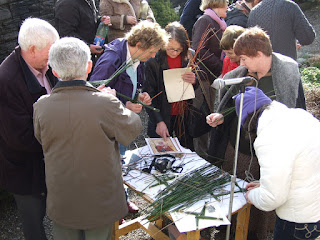