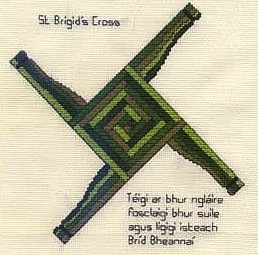 Below is an extremely interesting account of the rituals of Saint Brigid's eve as they were practiced in Omeath, County Louth, presumably up until the nineteenth century. I was struck by the strongly Christian aspects of the ritual here, the emphasis is on being girded with the cross and shield the better to fight the good fight, rather than on fighting rival groups or on corn dollies. The Brideog here is more of what the Americans would call a 'homecoming queen' type of figure, and there is a strongly moralistic tone to the ritual.

I intend to describe one of the old religious customs of Omeath which, unfortunately, has been allowed to fall into disuse.

The ceremony, which took place on St. Brigid’s Eve is now remembered by only a few of the older people in Omeath. Nicholas O’Kearney gives a good description of it in one of his manuscripts, and to him I am indebted for the following account:

It was the universal custom to prepare the Cros Bhrighite, the Sgaith Bhrighite and the Crothan Bhrighite -i.e., the Cross, Shield and Veil of St. Brigid, on the eve of the Saint’s festival. They were generally platted from the strong grass which grows in morasses or about lakes, and they were done with great ingenuity, for the inhabitants of the different townlands vied with one another in producing the neatest and most ingeniously wrought shield and cross. In the evening, the people of each townland assembled into one place to perform the pious ceremony. The most exemplary virgin in the townland was always chosen as An Bhrideog, to bear the cross, shield and veil, and if her name was Brigid it was an additional recommendation.

The maiden thus selected put on the veil, took the cross in her right hand and the shield in her left and proceeded to each house, followed by the people who were engaged in humble prayer, invoking the Almighty Ruler of the universe to fill, with His Holy Spirit, those of His servants who dwelt in that house, and to enable them to keep His commandments according to the example of the great St. Brigid. When the procession reached the house, the Brideog put the question to those inside: "Are you resolved, with God's assistance, to obey His laws and those of His Church and to lead blameless lives like the great St. Brigid?" The answer was usually in the affirmative, upon which the Brideog presented the cross made for that house. with the words, “Take the sword with which the great St. Brigid fought against her enemies, the world, the flesh and the devil, and remember to bear the crosses of this life with true Christian fortitude after the example of the great St. Brigid."
On presenting the shield, she said, “ Take ye this shield, the shield of Faith; remember the many victories gained by St. Brigid under its protecting influence, and bravely follow her example.” On presenting the veil, she asked, “Will you follow the rules of virtue. piety and general good conduct laid down for your guidance by St. Brigid ?" The mistress of the house then called on the daughters and female domestics to answer in the sincerity of their hearts, and she presented the veil, saying, " Be modest, chaste, and virtuous according to the example which the saint, whose festival we celebrate, has left for your imitation." Then the cross was held up, and the whole assembly were called on to remember their redemption on that instrument, upon which exhortation, all would fall on their knees and join in fervent prayer to Almighty God that with the assistance of His divine aid, they might spend the coming year in piety and virtue.

Thus the pious procession proceeded from house to house, and after the ceremony the crosses, shields and veils were placed over the doors, in order that they might never be out of sight of the inmates, and especially that their attention might be frequently called to the promises made to God on St. Brigid's Day. In case the sons or male inmates were suspected of a breach of the laws of God, parents did not fail to call their attention to the cross and shield placed over the door, and the mothers frequently put their daughters and female domestics in memory of the veil and ceremonies of St. Brigid’s eve. Rarely, we are told, were they appealed to in vain. It was by these and similar means that the seeds of piety, virtue and morality were sown and nurtured in the minds of the people of Ireland, and it is to be regretted that these old customs were often ridiculed, even by some of those whose duty it was to guard the morality and piety of the people.

In Omeath, this custom was sneered at so long that it gradually fell into disuse, but St. Brigid’s crosses can still be found in a few of the houses.

In the following poem, attributed by some to Peadar O’Doirnin, the poet approves of the custom, and encourages the Brideog to go on with her work, unhesitatingly :-

Virgin, pure as bright sunshine, whose converse so pure
Often forced my poor frail heart sharp pains to endure
Bear the shield, I beseech you, like heroine true,
For black guile never marked a foul stain upon you.

Oh, dignified maid of the silk tendrilled hair,
Let pure virtue blush not, though vicious eyes stare;
Take the shield, and remember ‘tis pattern for thee,
And ask the high powers of heaven for me.

From the task never shrink, ‘tis a pious old rite,
Many maids, humbly praying, confess it this night,
Though not mine, bloom of beauty, what feelings of pride
I conceive, when I see you so brightly preside.

We are told by the Church that St. Brigid's bright shield
Can defend us 'gainst sin in temptations dread field:
Yet I'd choose, modest maid, heaven pardon the crime,
That thou wert by blessed wedlock my fair captive prize.

Since the strong inspirations of virtue prevail,
How divine is the face that blooms under the veil;
‘Tis your last pious shield; the last veil you’ll receive,
For I hope you'll be mine before next Brigid's eve.