The Darker Side of the Biddy Boys 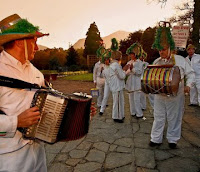 A number of young men disguised themselves and dressed up a figure which they called 'Breeda'. It was the custom to call to every house in the neighbourhood. On entering a house they demanded money for 'Breeda' and generally danced for a few minutes with the girls of the house. In a house in which the owner took the whole thing as a joke they departed quietly, but when they were taken roughly they generally took all the bread they could find in the house away with them. On entering a Public House they took whatever drinks were on the counter. This often caused a row with the people who had paid for the drinks, but as the 'Brideogs' were always in considerable numbers they generally came out as best. When two bunches of 'Brideogs' met there was some excitement as the strongest party always relieved the other of whatever money they had collected.

I have no difficulty in seeing some of the less savoury aspects of Irish culture reflected in the Biddy Boys. We have a history of faction fighting and of secret agrarian societies prepared to use intimidation, so it comes as no surprise to find these elements in this tradition, in certain parts of the country at least. This type of behaviour is associated with exclusively male groups of 'Brideogs', but as we shall see, there was a feminine tradition associated with popular rituals on the eve of Saint Brigid in the Irish countryside as well.