A specialized form of the Saint Brigid's cross was known as the Crios Bhride or Saint Brigid's belt. It was associated particularly with the County Galway area. The belt was a rope made or straw or rushes, in the form of a ring with one or more crosses on it. It would also be taken around the various houses on Saint Brigid's Eve and people would be passed in and out through it to secure the protection of the saint for the coming year. A ritual verse or 'rann' was associated with it:

Crios, Brigid's crois, my crios, crios of the four crosses, it was Mary that went into it and Brigid who came out. If you are well off today, may you be seven times better off a year from today.

As An t-Athair O Duinn explains, the actual ritual of passing through the Crios was relatively simple:

It appears that the person first kissed the cross jutting out from the crios. Then, he lifted the crios over his head, opened it so that it formed a circle and let it fall down around him so that when it fell on the floor he was actually standing inside the crios as at the centre of a circle. Then, putting the right foot first, he stepped out of the crios. This was repeated three times.

As a picture is worth a thousand words, here is a woman being passed through the crios at Liscannor, County Clare: 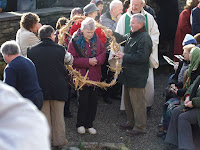