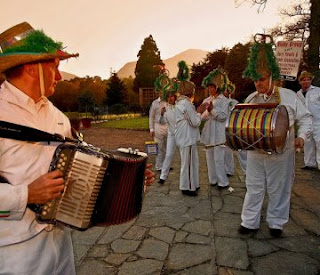 A 2011 account of the tradition of 'Biddy Boys' in rural County Kerry. In 2009 I posted a newspaper article on the revival of the Biddy Boys in rural County Fermanagh. Although it was portrayed as a bit of harmless fun, I suggested that there might also be a darker side to the Biddy as it once operated in Kerry, and so it is interesting to see how it has developed there. The masks have been abandoned and the money now collected is being given to charity.

THE ANCIENT tradition of “the Biddy”, to celebrate the coming of spring and events surrounding St Brigid’s Day today, continues in the southwest, with just a few concessions to modernity.

This week will see white-cladded, straw-hatted, accordion-bearing men and women tour the villages and households from Glenbeigh to Kenmare to Ballyvourney over the Cork border to dance around kitchens and pubs.

Instead of collecting house- to-house for a Biddy ball, the Biddy groups nowadays collect money for charity.

One of the largest Biddy groups is that of the Kerry Parents and Friends charity in aid of people with intellectual disabilities. It is drawn from parishes in rural Killarney.

“People welcome us when we call to the doors asking if they have any objection to the Biddy and we dance a half set,” Paul Cremin, one of the organisers said. “Then we do the brush dance [a dance with a sweeping brush].” When members of the household want to join in, a full set is danced. Generally they call to houses where they know there is Biddy knowledge.

The Parents and Friends Biddy, drawn from a panel of 25 musicians and dancers, travel by bus.

In Beaufort in the foothills of the MacGillycuddy’s Reeks, where Mr Cremin lives, the Biddy has been known for hundreds of years.

There are a number of modern concessions, though, and the homemade and often- frightening masks – which once disguised the identity of the members of the Biddy group – are no longer worn.

The tall straw hats are removed to protect the lighting in many houses and pubs. However, it is still a case of dancing around kitchens, even in the most modern of houses.

“We have two sets of hats, small hats for the houses in case we break anything, but fair play to people, they welcome us.”

Mr Cremin’s group has collected thousands of euro for charity over the past decade.

Meanwhile, the tradition of the Biddy has developed into a cultural festival in south Kerry.

The Éigse na Brídeoige cultural festival which takes place during this coming weekend, the first weekend in February, in the Gaeltacht areas of Iveragh opens on Friday and will explore the ancient links between south Kerry and northern Spain.