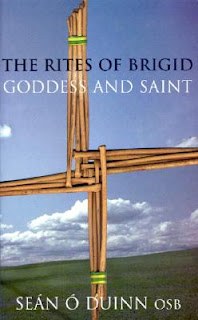 The popular customs for Saint Brigid's Eve seem to have varied a great deal between different parts of the country. Another ritual which took place throughout Ireland was the 'threshold rite' in which Saint Brigid would be symbolically admitted to bless the family home. In the early 1940s, the Irish Folklore Commission undertook a survey of popular traditions practiced in honour of Saint Brigid. An t-Athair Sean O Duinn, OSB, has collected and translated a number of the IFC transcripts in his book 'The Rites of Brigid - Goddess and Saint'. The basic elements of the threshold rite were that the family would gather together to make a special meal of mashed potatoes, rushes would be gathered to make Saint Brigid's crosses, and then someone would symbolically take the role of Saint Brigid, knocking at the door and asking 3 times to be admitted. The door dialogue usually included the phrases 'Go down on your knees and let Holy Brigid enter' to which those inside would reply 'She is welcome; she is welcome'. There was a link between the food and the rushes in that the rushes had to be brought in by the person playing the role of Brigid and placed under the pot of potatoes. After the supper the family would then make crosses from the rushes. An t-Athair O Duinn draws parallels between this threshold ritual and some of the liturgical rites found in the great cathedrals of Europe and the Roman rite of dedication of a church.

He ends the accounts of the threshold rite with a report from County Leitrim where the door dialogue had fallen into disuse but where the elements of the rushes and the food were retained. The respondent to the Folklore Commission survey in 1942 described the making of the crosses in exclusively Christian terms:

On the evening of the feast, a bunch of rushes is cut, and placed under the table. After the supper, the cross is made. The cross I always make is the rush cross, and to make this properly you require 49 rushes. One of these is unbroken and the other 48 bent and form the 4 sides of the cross. The unbroken rush represents Jesus Christ and the twelve on each side represent the 12 Apostles. St Brigid always had great devotion to Jesus Christ and the 12 Apostles and hence the number of rushes...

When the cross was made, the head of the house went round the house with it and placed it in every window and door round the house and said at each entrance or window: 'St Brigid, save us from all fever, famine and fire'