Vignettes from the Lives of the Irish Saints: Saint Patrick's Winding Sheet 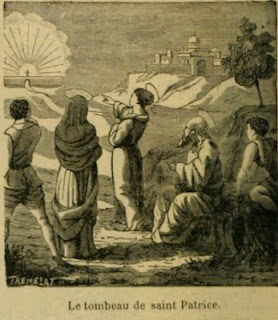 Hagiography portrays the male and female patrons of Ireland as having had contact with each other in life, including this story of the winding sheet which Saint Brigid, 'the pearl of Ireland', wove with her own fair hands for the dying Saint Patrick:

Within a few days after this, as the most holy senior, St. Patrick, sat near the city of Down, and not far from its church, he preached regarding the glory of Heaven, to a great multitude of religious and ecclesiastical men. Then, a wonderful splendour illuminated a certain place, in the eastern part of the churchyard. The pearl of Ireland, the illustrious St. Brigid, happened to be present. The saint commanded her, to declare this mystery of, and to account for, that Divine light. She then told, in the hearing of all the assembly, how that celestial light had consecrated and designated the place,  where a saint, most glorious and most dear to God, should shortly be interred.  Then, a holy virgin, named Ethembria, who was there, asked St. Brigid, to particularize the great person, who should there be deposited. The holy Brigid thereupon declared, that it should be the place of sepulture, for the Patron and Apostle of Ireland, St. Patrick; and, then, added further, that she would account herself most happy, if his sacred body might be wrapped in a winding-sheet, which she had spun and woven with her own hands. This she had prepared, for such a sacred purpose. Soon, the great light disappeared, but a vision of St. Patrick ascending to Heaven accompanied its vanishing. The blessed Apostle, knowing by Divine inspiration the holy virgin's desire, commanded her to go, and to bring that sheet, wherein the illustrious woman would have his body wrapt. He then went to the monastery of Saul, where falling sick, he expected the end of this life, or rather the beginning of another life that hath no end. The holy virgin Brigid was so wearied with the length and difficulty of her journey, that she could not come to him, so soon as she purposed. The Blessed Bishop, knowing in what distress the pious virgin was, sent chariots, to meet herself, and four other pious virgins, coming to Saul, where the saint lay sick. She soon presented him with the sheet, which he received very gratefully. Then, kissing his feet and hands, she and her virgins received his last benediction.