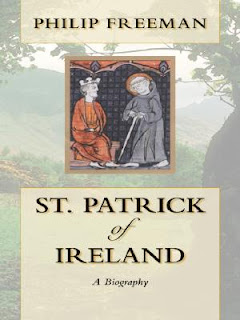 Below is a post I made a couple of years ago to the Celt List. At the time I had been reading Philip Freeman's biography of Saint Patrick and found his epilogue on Patrick's Letters a useful summary of the sources for these texts. In general, I was pleasantly surprised by Freeman's book, forgive me if I offend here but American works are often filled with stereotypes of Ireland and its patron. Freeman's work, however, is a million miles away from all that 'Saint Patty's Day' nonsense and attempts to place Saint Patrick in his historical context. Whilst the book is aimed at the general reader and thus a basic introduction to the person and the world of Saint Patrick, it is solidly-based on scholarship and has a useful bibliography of the sources for each of the chapters. As the author is a Classics Professor he has made his own translation of Saint Patrick's writings, although the very modern feel of these wasn't appealing to me personally. In the extract below Freeman explains that there are only seven surviving manuscript sources for Saint Patrick's writings, tomorrow I will post a second extract which describes how these sources were rediscovered after many centuries of obscurity:

...In a dark corner of the same room [at Trinity College, Dublin where the Book of Kells is on display], often overlooked by visitors, is a small and comparatively dull-looking manuscript known as the Book of Armagh. Inside the fragile pages of this book is the oldest surviving copy of the Confession, written out by the scribe Ferdomnach around the year 807, more than three centuries after the death of Patrick.

...It's remarkable that the Confession and Letter to the Soldiers of Coroticus survived at all. The Book of Armagh contains one of only seven copies of Patrick's letters that have been preserved to the present day. These precious manuscripts are our only links to the genuine Patrick who lived more than fifteen centuries ago. They are copies of copies of his original two letters reproduced by monastic scribes in medieval Europe. As with any document copied repeatedly, mistakes and omissions crept in, so that the surviving manuscripts of Patrick's letters differ in subtle and not so subtle ways. Aside from the Book of Armagh in Dublin, the other six manuscripts are in the National Library in Paris, the municipal libraries of Arras and Rouen in northern France, the British Library in London, and two at Salisbury Cathedral in southern England. Each has its unique and sometimes troubled history.

The Book of Armagh, even though it is the oldest manuscript, is not necessarily the best for discovering the original text of Patrick's letters. To begin with, it omits entirely the Letter to the Soldiers of Coroticus and leaves out significant portions of the Confession. The missing parts of the Confession are frequently the sections in which Patrick appears most human and least saintlike - the passages in which he admits his weaknesses and failings. It seems likely that the scribes and authorities at Armagh wanted to present a Patrick who better fit their own model of what a saint should be. Why the letter to Coroticus and his men is omitted is more of a mystery. It doesn't make Patrick look bad at all; rather it shows him at his strongest, fighting evil and exerting his authority - qualities the churchmen of Armagh would have prized. Thus the shorter letter was probably not deliberately left out but rather lost to the scribes at Armagh sometime during the three centuries between Patrick's original composition and the year Ferdomnach made his copy.

The Book of Armagh sat quietly on a library shelf until, in the year 937, an Irish king recognized its immense value and ordered it enshrined and placed in a leather case. In 1004 a priest recorded on a blank page of the manuscript that Brian Boru, high king of Ireland, visited Armagh and affirmed the privileges of that church. A century later an Armagh clergyman angry at being replaced briefly ran away with the manuscript in a huff. It was then decided that such an important book needed a special protector, so a man was chosen who became known as the Maor na Canoine (Keeper of the Book). The position was hereditary, so his descendants bore the responsibility for guarding the book for centuries thereafter. Anyone today with the name MacMaoir or MacMoyre (son of the Keeper) is a member of this family.

Hard times fell on Ireland with the English incursions of the seventeenth century; in 1680 Florence MacMoyre, last of the hereditary Keepers of the Book, pawned it for five pounds. The book changed hands several times before ending up in the Royal Irish Academy in 1846. Seven years later the archbishop of Armagh purchased the manuscript and presented it to Trinity College, where it remains to this day.

Much less is known about the history of the other six manuscripts of Patrick's letters. The best evidence suggests that all of them derive from a single copy of both letters that arrived on the continent in the early seventh century. The letters were copied and recopied by scribes and deposited in monasteries in northern France. The Paris manuscript, dating to the tenth century, is the earliest complete copy of both letters. This small volume was part of the abbey library at Saint-Corneille in nearby Compiegne until Napoleon's minister of the interior confiscated it in 1802 and sent it to Paris. It has survived the centuries beautifully, unlike the manuscripts from Arras and Rouen. The Arras volume lost parts in the seventeenth century, while the Rouen manuscript is a crumbling fragment preserving only the first pages of the Confession. The manuscripts in England, preserving both letters, derive from earlier French copies and date to the eleventh and twelfth centuries.