Saint Fiacc's Poem on the Life of Saint Patrick 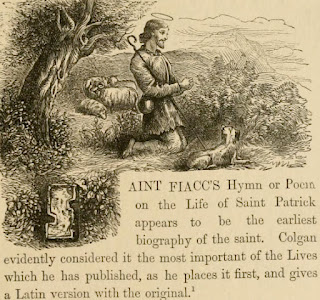 Below is a translation taken from an Irish Ecclesiastical Record paper on Saint Fiacc's hymn on the Life of Saint Patrick. I have not been able to reproduce either the Irish text or the footnotes, but both are available to consult online in the original volume. There is also a substantial introduction to the hymn and its author in the original paper which I have not reprinted. The hymn, like many in the Irish Liber Hymnorum, has its own preface describing where, when and in what circumstances it was written - or place, time and cause. Modern scholars are still debating this issue for themselves, the general consensus is that the hymn cannot be 5th-century on both linguistic grounds and the presence of elements associated with the later Armagh tradition.

Fiach of Sleibhte (Sletty) that composed this hymn for Patrick. This Fiach was son of Mac Ercha, son of Bregan, son of Daire Barrach (a quo Ui Bairche), son of Cathair Mor. This Fiach, then, was foster-son to Dubhthach Mac Ui Lugair, who was chief poet of Erinn. In the time of Laeghaire Mac Neill . . . . [a word effaced]; and it was this Dubthach who rose up before Patrick in Tara, after Laeghaire had desired that no one should rise up before him in the [house] ; and he was a friend of Patrick's from thenceforth ; and he was afterwards baptized by Patrick. [Patrick] went one time to the house of this Dubhthach in Leinster, and Dubhthach indeed gave great welcome to Patrick. Patrick said to Dubhthach," seek for me", said he, " a 'man of grade', of good family, of good morals, with one wife and one son". " Why seek you this, i.e. a man of that character?" asked Dubhthach. " To go into orders" [said Patrick]. " Fiach is he", replied Dubhthach, "and he went on a circuit into Connaught". Whilst they were thus speaking, Fiach came with [the tributes of] his circuit (or visitation). " Here is", said Dubhthach, "the person of whom we spoke". "Though he may be", said Patrick, "still he may not like what we have said". " Let a pretence be made of tonsuring me", said Dubhthach, " that Fiach may see". When Fiach saw, he asked, " Why do you seek to tonsure Dubhthach", said he, " for he is a loss to us, as there is not in Erinn a poet like him". " You shall be adopted in his stead", said Patrick. " My loss is less than Dubhthach's", said Fiach. Patrick then cut off Fiach's beard, and great grace came upon him afterwards, so that he read the whole Ordo Ecclesiae in one night, or in fifteen days as others say, and he received the degree of a bishop ; and therefore it is that he is archbishop of all Lagenia, and his successor after him. The place [where the hymn was composed] is Duma Gobhla, to the north-west of Sleibhte. The time, moreover, that of Lugaidh, son of Laeghaire, for he was king of Erinn then. The cause, also, to praise Patrick, and after his death it was composed, as some assert.

1. Patrick was born at Emptur ; this it is that history relates to us.
A child of sixteen years (was he) when he was taken into bondage.

2. Succat was his name, it is said: who was his father is thus told;
He was Son of Calpurn, son of Otidus, grandson of Deochain Odissus.

3. He was six years in slavery; human food he ate it not:
Cothraige he was called, for as slave he served four families.

4.Victor said to Milcho's slave: " Go thou over the sea":
He placed his foot upon the Leac (stone): its trace remains, it wears not away.

5. He sent him across all the Alps : over the sea marvellous was his course,
Until he staid with Germanus in the south, in southern Letha.

6. In the islands of the Tyrrhene Sea he staid: therein he meditated:
He read the canon with Germanus: it is this that history relates.

7. To Ireland he was brought back in visions by the angels of God:
Often was he in vision solicited to return thither again.

8. Salvation to Ireland was the coming of Patrick to Eochlaidh;
Afar was heard the sound of the call of the youths of Caill-Fochladh.

9. They prayed that the saint would come, that he would return from Letha,
To convert the people of Erin from error to life.

10. The "Tuatha" of Erin were prophesying that a new kingdom of faith would come,
That it would last for evermore : the land of Tara would be waste and silent.

11. The druids of Loegaire concealed not from him the coming of Patrick:
Their prophecy was verified as to the kingdom of which they spoke.

12. Patrick walked in piety till his death: he was powerful in the extirpation of sin:
He raised his hands in blessing upon the tribes of men.

13. Hymns, and the Apocalypse, and the thrice fifty (Psalms) he was wont to sing,
He preached, baptized, and prayed ; from the praise of God he ceased not.

14. The cold of the weather deterred him not from passing the night in ponds:
By Heaven his kingdom was protected: he preached by day on the hills.

15. In Slan, in the territory of Benna-Bairche, hunger or thirst possessed him not.
Each night he sang a hundred psalms, to adore the King of Angels.

16. He slept on a bare stone then, and a wet sackcloth around him:
A bare rock was his pillow; he allowed not his body to be in warmth.

17. He preached the Gospel to all: he wrought great miracles in Letha;
He healed the lame and the lepers : the dead he restored to life.

18. Patrick preached to the Scoti: he endured great toil in Letha:
With him will come to judgment every one whom he brought to the life of faith.

19. The sons of Emer, the sons of Eremon, all went to Cisal,
To the abode of Satan; they were swallowed up in the deep abyss,

20. Until the Apostle came to them; he came despite the raging tempests:
He preached, for three-score years, the cross of Christ to the Tribes of Feni.

21. On the land of Erin there was darkness; the Tuatha adored the Sidhi;
They believed not in the true Deity of the true Trinity.

22. In Ardmagh there is sovereignty: it is long since Emain passed away;
A great church is Dun-Leihglasse; I wish not that Tara should be a desert.

23. Patrick, when he was in sickness, desired to go to Ardmagh:
An angel went to meet him on the road in the middle of the day:

24. Patrick came southwards towards Victor; he it was that went to meet him :
The bush, in which Victor was, was in a blaze: from the flame he (the angel) spoke :

25. He said : Thy dignity (shall be) at Armagh: return thanks to Christ:
To Heaven thou shalt come ; thy prayer is granted thee.

26. The hymn which thou chosest in life shall be a corselet of protection to all ;
Around thee on the day of judgment the men of Erin will come for judgment.

27. Tassach remained after him (in Sabhall), having given the communion to him :
He said that Patrick would return : the word of Tassach was not false.

28. He (St. Patrick) put an end to night; light ceased not with him;
To a year's end there was radiance; it was a long day of peace.

29. At the battle fought around Beth-horon against the Canaanites by the son of Nun
The sun stood still at Gabaon : this it is that the Scripture tells us.

31. The clergy of Erin went from every part to watch around Patrick,
The sound of harmony fell upon them, so that they slept, enchanted on the way.

32. Patrick's body from his soul was severed after pains ;
The angels of God on the first night kept choir around it unceasingly.

33. When Patrick departed (from life), he went to visit the other Patrick ;
Together they ascended to Jesus Son of Mary.

34. Patrick without arrogance or pride, great was the good which he proposed to himself,
To be in the service of Mary's Son: happy the hour in which Patrick was born.