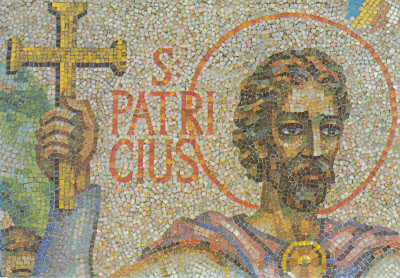 Below is the text and accompanying translation of an Irish medieval plainchant hymn for 1st Vespers from Sarum-rite Divine Office manuscripts 79 and 80, preserved in Trinity College, Dublin. TCD 79 is an antiphonal, dating to c. 1431-1435, previously in use at the Church of St John the Evangelist, Dublin. TCD 80 is an early 15th-century Breviary thought to have come from Kilmoone, County Meath. Selections from the office in honour of Saint Patrick have been recorded by the ensemble Canty on the CD 'Apostle of Ireland- Irish Medieval Plainchant - An Office for Saint Patrick'. Dr Ann Buckley, who has worked on the manuscripts comments in the accompanying notes:

'Ecce fulget', included on this recording, is found in two parts in the Kilmoone Breviary (MS 80): the first part, strophes 1-6 and 11, was sung at First Vespers; and the second part, strophes 6-11 ('Ad hanc doctor') at Matins. The entire text of this hymn occurs also in the Trinity College, Dublin copy of the Irish Liber Hymnorum (MS 1441), a collection dating from the late 10th/early 11th century, although 'Ecce fulget' was added later. The only surviving melody associated with it is that found in the Kilmoone Breviary, a melody not unique to Patrick but in standard use in the Gregorian repertory.

Behold the shining brightness
of the solemnity of Patrick
when, having laid aside his body,
he happily ascends to heaven.

Already from his boyhood
he was filled with divine grace
and began to love the life
of angelic dignity.

This man of a blessed lineage
was born in Britain
and after receiving baptism
strove to attain the heights.

But the merciful and upright Lord
knowing the shape of future things
directed this apostle
to the people of Ireland.

For this island was
fruitful with the earth’s good things
yet dragged down to the lowest point
by its idolatrous worship.

When he arrived here
the distinguised teacher, Patrick,
preached to the heathens
that which he lived in his life.

The heathens assented
to his sacred warnings
and spitting out the devil
worshipped the King of all.

And rejoicing to be free
they returned to their homeland
from which they had once been expelled
through the serpent’s cunning.

Therefore, most beloved,
let us in turn sing psalms
with heart and voice to Christ
in praise of this bishop,

So that with his help,
freed from vice,
we may fully enjoy
the angelic vision in glory.

Praise be to the Father, in the Son
with the Spirit Paraclete,
who by his gift of grace
has shown mercy to Ireland. Amen