Devotion to Saint Patrick in Europe 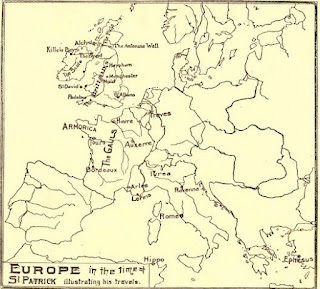 We are used in our own times to Saint Patrick's Day being a world-wide phenomenon, but devotion to Ireland's patron had been spread outside these islands many centuries ago, as Dom Louis Gougaud recounts in his classic work on the Irish saints in Europe:

St. Patrick had travelled through Gaul, but it was only in Ireland that he carried out his apostleship. His cult was, however, introduced to continental countries by the very first missionaries from beyond the seas. His natalis, on the 17th March, a birthday which has remained, above all save one, sacred to every son of Erin, was celebrated as early as the seventh century at Luxeuil, at Peronne, and at Fosses in Belgium; at Echternach, Corbie, Nivelles and Reichenau probably from the very foundation of those abbeys. The celebration of the 17th March can be proved at Treves and at Landévennec in Britanny in the tenth and eleventh centuries.

When we realise the antiquity and wide spreading of this liturgical devotion, we are the less surprised that popular piety should in its turn have seized upon this foreign saint in order to make of him one of its most beloved heroes. Many churches and monasteries boasted that they possessed some of his relics: Saint-Pierre of Rheims, Lisieux, Issoudun, Pfaffers in Switzerland, Lumiar near Lisbon. The village of Neubronn, half a league from Hohenstadt, near Aalen (Wurtemberg), possesses a statue of the saint which is greatly venerated throughout the district. In Upper Styria, Patrick is invoked as protector of cattle; elsewhere prayer is said to him to obtain the cure of the deaf and dumb. According to a Breton saying, whoever kills an earwig with his finger gets the saint's blessing. This, no doubt, is attributable to the undying belief which insists that the apostle of Ireland drove out of that island snakes and all poisonous creatures.