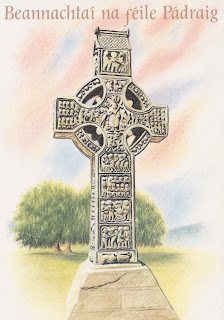 Beannachtaí na Féile Pádraig oraibh! It is always interesting to keep an eye on how the media report and present the feast of our national patrons. There is a marked difference between those of Saints Patrick and Brigid, Patrick is unencumbered by the neo-pagan baggage loaded on to Saint Brigid as his Christian credentials are too firmly established. Instead, most journalists set themselves to debunking popular myths about snakes and shamrock. They also seize upon the new Patrician scholarship which views Saint Patrick in a very different light to the all-conquering national hero of Canon O'Hanlon's time. A good example of this was published in 2010 in The Irish Times, although the title 'How Patrick beat Brigid to become our saint of choice' is somewhat misleading as the piece doesn't actually mention Saint Brigid at all.

How Patrick beat Brigid to become our saint of choice

How did St Patrick get the gig as Ireland’s patron saint?

WHILE ST PATRICK has had the edge in terms of recognition as Ireland’s patron since the dawn of recorded history, St Patrick’s Day has only been a national holiday in Ireland since 1903, when the British Parliament passed the Bank Holiday (Ireland) Act. St Patrick’s Day parades have a somewhat longer pedigree, with the earliest recorded taking place in 1762 in Manhattan, when the participants were Irish-born British soldiers. Parading for St Patrick’s Day does not seem to date back any further than the 19th century in Ireland.

Curiously, while the Irish held Patrick in the highest reverence, many centuries were to pass before the name Patrick began to be used as a personal name in Ireland.

The consensus among historians these days is that Patrick’s missionary activity in Ireland took place during the late fifth century. However, it was not until the seventh century that documentary material began to emerge in Ireland in any significant quantity. Some of the earliest of this furnishes evidence of the status in which Patrick’s memory was already held. A hymn, probably dating from the early seventh century, compares Patrick to St Peter and St Paul. A letter written in the early-630s by Cummian refers to Patrick as papa noster – “our father”.

So, how did Patrick acquire this stellar reputation within little more than a century of his death? For those wishing to push his cause, Patrick had a unique selling point among the saints of early Ireland: he was the only saint from the early period of missionary activity in Ireland who left a personal account of his spiritual life’s journey.

This was his Confession. Its natural style and lack of any obvious agenda have contributed to the universal view among historians that it is the genuine work of Patrick. It is at once a testament to one man’s strong Christian faith and a memorable adventure story. In the Confession Patrick relates how, as a boy, he was captured from his native Britain by Irish raiders and sold into slavery in Ireland, and how he eventually escaped, returning to Ireland some years later as a bishop to spread the Christian message in the land of his former captors. By his own account, Patrick baptised many thousands of people.

By the late seventh century, the Patrick machine, driven by the monastery of Armagh and its federation of churches, had moved into full swing, with the publication of two major works on Patrick – his life by Muirchú and the collection of Patrician data authored by Tírechán. These works were hugely influential in advancing the Patrician claims of the church of Armagh. At the hands of Tírechán and, more particularly, Muirchú, Patrick was transformed beyond recognition into a superhero. The humble bishop evident in the Confession had been replaced by a larger-than-life character, with a streak of vengefulness, who can match the druids as a performer of extraordinary deeds.

In practice, what it seems was being sought was control over all those churches associated with the earliest phase of evangelisation as well as a more general leadership of the churches in Ireland.

The Armagh propagandists had a further arrow in their quiver. They claimed possession of a collection of remarkable relics, with which no other early Irish monastery could compete. According to the seventh century Book of the Angel, these included the relics of the martyrs Peter, Paul, Stephen and Lawrence, and a sacred linen cloth marked with the blood of Jesus. The significance of such relics in terms of enhancing Armagh’s standing and generating revenue would have been considerable.