The Problem of Saint Patrick

In this essay, scholar Dorothy Africa provides a brief look at the writings of and about Saint Patrick.

Two documents written by this fifth-century British-born missionary to Ireland survive. One is a letter to the British chieftain named Coroticus concerning a raid by his henchmen who had seized some Irish Christians. The other, known as the Confessio, is a self-defense of Patrick's own missionary career, apparently submitted to an ecclesiastical body of some kind conducting a disciplinary review or formal inquiry. Most of what is known about the man comes from these two pieces. The evolving legend of the saint is reflected in a series of medieval lives and stories about him, the earliest of those extant dating to the late seventh century. 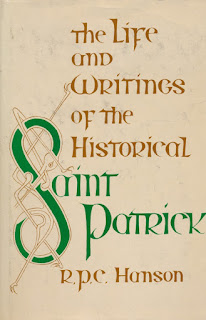 Patrick is presumed to have lived and worked in Ireland from the middle to the latter part of the fifth century, though some scholars have argued for both earlier and later dates. The continental chronicle of Prosper of Aquitaine in the year 431 reports that Pope Celestine had ordained Palladius as the first bishop to the Irish. According to the Irish hagiographical tradition, Palladius failed in his mission and was succeeded by Patrick, but we have no independent contemporary confirmation of the claim.

In the Confessio, Patrick provides a brief sketch of his own life in the course of describing his personal spiritual evolution. He was born to a prosperous Romano-British Christian family of some local prominence. When he was sixteen, Patrick was seized by raiders and sold as a slave in Ireland, where he experienced an intense spiritual conversion. He was able to escape and return to his family, but some time later (how much later Patrick does not say) he returned to Ireland in obedience to a divine summons received in a dream vividly described in the Confessio.

It is not known what official ecclesiastical backing Patrick had for his mission to Ireland. He refers to his ordination as a bishop but does not say where or by whom he was made one, nor does he name associates in his mission. The persons to whom the Confessio is addressed are never named. What does emerge very clearly from the Confessio is Patrick's own conviction that the authority for his ministry in Ireland was divine in origin and therefore not subject to question because of his own personal failings. The letter to Coroticus adds little information about Patrick himself, but it attests to the hardships of his mission and the perilous environment for his converts. In both documents Patrick shows a particular concern for the women among them, respecting their courage and the strength of their faith, and fearing for them.

The two earliest surviving lives of the saint were composed in Ireland in the late seventh century, nearly two hundred years after Patrick's time. Most scholars consider the career of the saint presented in these early lives as an amalgam drawn from the careers of Patrick, the shadowy Palladius mentioned by Prosper, and perhaps other members of their missions. Both accounts are also highly colored by the political environment of their authors' own time, in which the ecclesiastical community at Armagh was vigorously asserting itself as the seat of the saint's cult and therefore as leader of the Christian church in Ireland. This claim was more explicitly and stridently asserted in the anonymous work called the Tripartite Life, which was probably composed in the tenth century at Armagh and certainly reflects the views of the community's members. This life seeks to establish Patrick as the apostle to all of Ireland and, by doing so, make Armagh the administrative head of all of its ecclesiastical institutions, despite Ireland's political fragmentation. All these early lives were composed in Ireland for an Irish audience and depict the saint as a powerful miracle worker whose deeds serve political ends as often as spiritual ones. In these lives Patrick blesses kings and dynasties, or curses their opponents, as often as he cures the sick and helps the poor.

The medieval lives of Patrick from the English and continental tradition are in marked contrast to the earlier Irish ones. They use the Irish tradition but are more in conformity with continental hagiography: The topographical and political details are reduced, and the intimidating ferocity of the Irish saint is tempered with a more decorous Christian humility. This trend was greatly advanced in the late twelfth century, after the Norman conquest of Ireland, when the professional hagiographer Jocelyn of Furness was commissioned by John de Courcy in 1185 to write a life of Patrick. It was this life that was widely circulated and eventually selected by the Catholic religious order known as the Bollandists for their great collection of saints' lives, the Acta Sanctorum. Another highly influential text of the late twelfth century was the Tractatus de Purgatorio Sancti Patricii (Tract on Saint Patrick's purgatory) written by a Cistercian monk at Saltrey. Although this tract was a literary vision of hell, not a life of the saint, its popularity helped to spread the reputation of the saint and his cult outside of Ireland.

Hanson, Richard Patrick Crosland. The Life and Writings of the Historical Saint Patrick. 1983.

Picard, Jean-Michael, trans. Saint Patrick's Purgatory: A Twelfth-Century Tale of a Journey to the Other World. Introduction by Yolande de Pontfarcy. 1985.