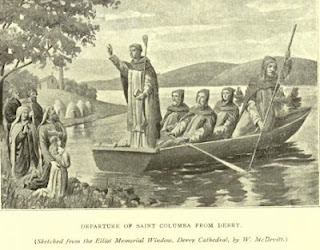 Below is a short essay on Saint Colum Cille by Columban specialist Brian Lacey:

Colum Cille (and other variations), the name by which he became known throughout Ireland and Gaelic Scotland, was revered as one of the three patron saints of medieval Ireland, along with Patrick and Brigit. He is also known by the Latin name, Columba. Almost every aspect of Colum Cille’s life became heavily mythologized, but around 700 his hagiographical Life was written in Latin by Adomnán, which, together with other sources, can be used to reconstruct some of the details of the saint’s actual life. The annals assign various dates to the main events of his life, suggesting that he was born around 520 (or 523) and left Ireland— ultimately to found the monastery of Iona—in 562 (or shortly afterward). His obituary is dated to 597 by the Annals of Ulster, which has been widely accepted, although Dr. Daniel McCarthy has argued that the chronology of the Annals of Tigernach, which would place his death at 593, may be more accurate. Legends say his birth occurred on December 7, the day St. Buite of Monasterboice died, and that this fell on a Thursday. There were strong traditions, especially in Scotland, associating the saint with Thursday. Colum Cille belonged to the Cenél Conaill, part of the northern Uí Néill. Legends claimed that he could have become high king. He certainly was extremely inﬂuential in the highest aristocratic and royal circles of his time, both in Ireland and northern Britain. Tradition points to a number of sites in the Gartan area of Donegal, said to be the locations of his birth and other events in his early life. Eithne, his mother, among other possibilities is claimed to have belonged to the Corbraige of Fanad, north of Gartan. She too was venerated as a saint. Her alleged grave is pointed out on Eileach an Naoimh, in the Garvellachs, in the Inner Hebrides. Colum Cille’s father, Fedelmid, was said to be a great-grandson of Niall Noígiallach. The saint had a brother, Iogen, and three sisters: Cuimne, Sinech, and Mincoleth, who was mother of the sons of Enan (after whom Kilmacrennan, Co. Donegal, is named). Several other members of his family became monks and priests, and some were also commemorated as minor saints. Legends claim that his original name was Crimthann, meaning something like “fox” or “deceitful one.” It is not certain that the name Colum Cille was ever used when he was alive, although it occurs in very early texts about him. Almost certainly his “Christian” name was the Latin Columba (Dove). The Irish “Colum Cille” (Dove of the Church) may itself be part of the growth of his cult. While he was still a deacon, Colum Cille spent time in Leinster studying with an “old master,” Gemmán. He is also said to have studied sacred scripture with a bishop Uinniau, identiﬁed by Pádraig Ó Riain as St. Finbarr of Movilla, County Down. Although there are many legends that purport to tell us about Colum Cille’s life as a young cleric, it is only with his departure for Iona in 562 (at about forty-one years of age) that we have any reliable information about him. He is credited with founding Derry (his ﬁrst and thus most beloved church) as early as 546, but it is clear that this date is too early, and the name of an alternative founder is recorded elsewhere. He is said to have founded many other monasteries in Ireland (such as Moone, Co. Kildare, and Swords, Co. Dublin), but it is certain that they too were established much later. One such place was Kells, County Meath, associated with the Book of Kells. Although traditions claim that Colum Cille founded this monastery, we know that it was established about 804–807. Likewise, the famous manuscript was sometimes later, erroneously, attributed to the saint. The one monastery that we can be certain that Colum Cille did found in Ireland, probably in the 580s on one of his return trips from Iona, was Durrow in County Offaly. Other places in Ireland that have strong traditional connections with the saint include: Glencolumbkille, in County Donegal, and Tory Island, nine miles off the coast of the same county. In the 1850s, William Reeves listed thirty-seven churches in Ireland, and ﬁfty-three in Scotland, that had dedications to Colum Cille; most of these, however, originated later than the life of the saint.

Adomnán links Colum Cille’s departure from Ireland with the battle of Cúl Dreimne in 561. Cúl Dreimne was near Drumcliff, County Sligo, where later there was a monastery dedicated to St. Colum Cille. The annals say that victory was gained for the northern Uí Néill on that ocasion, “through the prayer of Colum Cille,” over Diarmait mac Cerbaill. The facts about this battle became enshrouded in legends that suggest that Colum Cille himself had been responsible for it, and that it was as penance for this that he went into exile. Modern scholars and the earliest sources available, however, would suggest that Colum Cille’s exile was voluntary; Adomnán called him a “pilgrim for Christ.” This sort of practice, exile for the love of God, became known in the Irish church as “white martyrdom.” A list, drawn up about the early eighth century, claims that he left Ireland accompanied by twelve companions.

Colum Cille eventually established his most important monastery (c. 562/3) on Iona, a small island off the Isle of Mull, off the west coast of Scotland. This was to become one of the most inﬂuential ecclesiastical centers in western Christendom. A rectangular earthwork enclosing about eight acres, built, apparently, by earlier settlers, was re-occupied by the Irish monks; within it they built their monastery. We can get some impression of what that monastery was like from Adomnán’s Life. The great restored Benedictine Abbey that dominates the island now was begun in the early thirteenth century, but there are some earlier buildings, including one that is pointed out as the burial place of the saint, despite another tradition that he was reburied at Downpatrick. Among the signiﬁcant early monuments on Iona are the three great High Crosses, dedicated respectively to St.Oran, St. John, and St. Martin, that were carved, in that order, between about 750 and 800. Many other churches and monasteries in Ireland, Scotland, and northern England were founded from Iona, that is, the federation known as the Familia Columbae; some of these, although not all those claimed, were founded within the lifetime of the saint. Colum Cille did travel away from Iona, up the Great Glen of Scotland and even back to Ireland. He attended a signiﬁcant meeting in Ireland around 590, between his relative, the important Donegal king Áed mac Ainmerech, and the king of an Irish colony in Scotland, Áedán mac Gabráin. The Convention of Druimm Cete, as this meeting came to be known, and at which Colum Cille is said in legend to have saved the poets from expulsion from Ireland, gave rise to a whole host of legends. Colum Cille is, himself, remembered as a poet. Three Latin poems attributed to him are possibly genuine, but there are many others in Irish, which later propagandist poets put into his voice. The apparently contemporary manuscript of the Psalms, known as the Cathach, is also claimed as his work, but this has neither been substantiated nor disproved. Colum Cille died on Iona, probably on June 9 (his feast day) in 593 or 597. Very shortly after his death, the long poem known as the Amra Choluimb Chille (Elegy of Colum Cille) was written, allegedly by the famous poet Dallán Forgail. Other similar poems praising Colum Cille were written in the seventh century, and we know that a liber de virtutibus sancti Columbae (book on the virtues of saint Columba) was compiled in the mid-seventh century, although only one paragraph survives as a quotation in a version of Adomnán’s Life. In the later twelfth century another Life of Colum Cille was written in Irish, probably in Derry. This took the form of a homily for preaching on his feast day. The text is structured, mainly, as an account of the saint’s alleged journey around Ireland, founding churches and monasteries. The most elaborate Life of Colum Cille was written just over a thousand years after his birth, in 1532. This was prepared for Maghnus Ua Domhnaill who, in 1537, became chieftain of Tír Conaill (most of Co. Donegal). Throughout the Middle Ages, many other works, both hagiographical and secular, were also written about, or referred to, Colum Cille, each of which developed the fabulous legends about him and moved his ﬁctional character ever more distantly from that of his true identity. Professor Pádraig Ó Riain has also argued that several other early Irish saintly characters, such as St. Cainnech of Achad Bó, are really aliases of Colum Cille. In England, Durham Cathedral, as inheritor of some of the traditions of the seventh-century monastery on Lindisfarne Island off the coast of Northumberland, preserved aspects of the cult of Colum Cille down to the later Middle Ages, including some of the important early texts about him. His cult was also brought to continental Europe by various means.