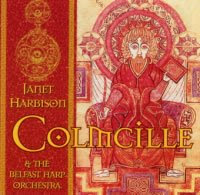 This recording in honour of Saint Columba is something different, combining liturgical texts, poetry and newly-composed instrumental pieces for the harp. It is the work of Janet Harbinson and performed by the Belfast Harp Orchestra and St Killian's Choir from Mullagh, Co.Cavan. The recording was issued in 1997 to commemorate the 1400th anniverary of Saint Columba's repose. Some of the Antiphons from the Inchcolm Antiphoner feature, including this one:

Full details of the recording and the artistes, plus sound samples, are available here.
Posted by Marcella at 20:21