In the Footsteps of Saint Patrick Around County Down 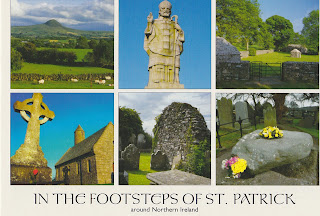 I have spent a week in County Down, based in the beautiful village of Dundrum. The entire area is rich in Patrician associations, Muirchú’s Life describes the work of Saint Patrick in the Lecale district, starting with his landing at the Slaney River. The saint encountered a local chieftain, Díchu, who lived ‘where Patrick’s barn is now’. After a visit to his old master near Slemish Patrick returned to Mag Inis (Lecale), and ‘he favoured and loved the district, and the faith began to spread there’. When close to death, he was told by the angel to ‘return to the place from which you came, that is, to Sabul’, where he died. Sabul is Old Irish for barn, and later sources fill out the story, explaining that Díchu gave Patrick his barn to use. Saul appears in some texts as the place of Patrick’s burial. 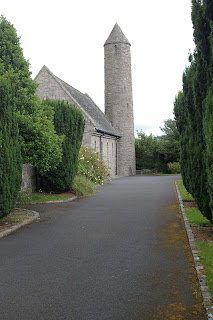 The site now consists of a modern Anglican church, built in 1933 as part of the 1500th anniversary celebrations of the coming of Saint Patrick, which seeks to recreate the architecture of the original 'barn' church. There is an adjoining graveyard and not far away a holy well dedicated to Saint Patrick which local tradition says is the baptismal site for the early converts.

I discovered as I called into various local churches that the story of Díchu's gift of the barn was a popular theme for stained glass windows. This one below, from the Catholic church at Saul shows Saint Patrick arriving by boat and Díchu waiting on the shore with his wolfhound: 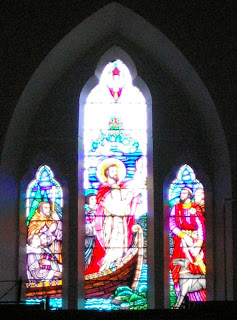 Another common theme is the depiction of Saint Patrick on his deathbed being given his last Holy Communion by Saint Tassach of Raholp, a incident recorded by Muirchú. Later sources add that Tassach was one of Patrick’s craftsmen: ‘he is the first that made a case for Jesu’s staff, and Raholp to the east of Downpatrick is his church’. This refers to the enshrining of the precious crozier, the Bachall Ísu, one of Ireland’s chief relics until its destruction in 1538. Calendars record Tassach’s festival day as 14 April. Nothing more is known until the 1306 taxation in which ‘the church of Rathcolpe’ is listed. The church was reported to be ruined in 1622. Raholp is just a 2 miles away from Saul and the ruins of Saint Tassach's church can still be seen: 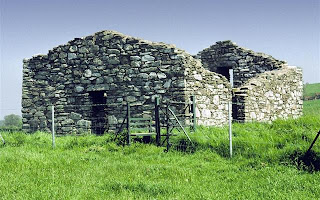 The county town of Downpatrick boasts the grave of Saint Patrick, which he shares with Saints Brigid and Columcille. As a local guidebook puts it:

Patrick, Colum and Brigid rest in glorious Down,
Lie in one tomb and consecrate the town.

Down Cathdedral was destroyed in 1538 by the infamous Lord Gray who also carried off the relics of the three saints, according to the Annals of Ulster, and destroyed their statues: 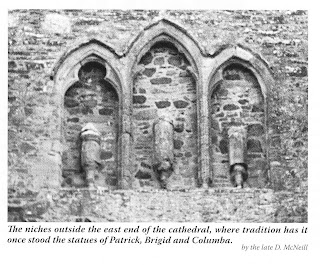 Some years later, Father Edmund MacCana claimed that his grandfather had seen Edward, Lord Cromwell, burn the relics of the three great saints in 1607. Despite these shocking accounts of gross impiety, the tradition that the graves of the saints were on the south side of the cathedral persisted. It seems that in the 18th century, the site of the burial shifted to outside the cathedral walls, as one account claims that three stone coffins were found under the high altar during renovation work to the building. These were buried outside and the market cross erected to mark the spot. Unfortunately, this cross was also destroyed by some later defenders of the Reformation but was replaced by a stone giving the names of the three patrons: 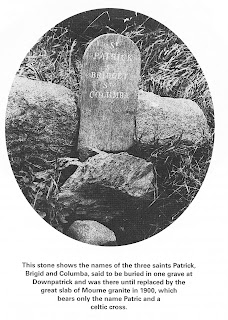 The burialplace continued to attract popular devotion, so much so that the practice of removing a handful of soil from the grave by departing emigrants was starting to undermine the site. In 1900, therefore, a huge slab of Mourne granite bearing the name PATRIC and a cross (which as the archaeological guide says is 'ironically of a type hardly ever found in Ulster') was laid over the site instead. It is interesting to see that only Saint Patrick is commemorated by name on this slab, the revival of interest in Saint Brigid being very much a phenomenon of our own times. I don't know why Saint Columcille was left out, as he is a saint who is an attractive figure for Protestants, but perhaps the desire was to claim Patrick for Down and leave the others to their better-known associations with Kildare and Donegal. Whatever the truth of the claims that the remains of the three great patrons of Ireland lie beneath this slab, all I can say is that the site has been hallowed by centuries of prayer and popular devotion: 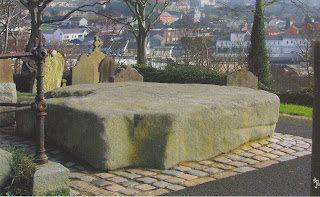 There is, of course, also the inevitable Visitors Centre, complete with multi-media exhibition and gift shop. The Saint Patrick's Centre at Downpatrick has a very good cafe and roof garden. I needed to fortify myself for the climb to the summit of Slieve Patrick, Down's very own answer to Croagh Patrick. This site was also a product of the 1930s anniversary, when a local farmer donated land midway between Saul and Raholp for the erection of a statue of Saint Patrick, his hand raised in blessing over the district. As is usual for Ireland, later expressions of Catholicism mingle with the ancient, as the climb to the top follows the Stations of the Cross, and a Lourdes Grotto awaits the pilgrim too. Saint Patrick, however, has the summit all to himself, his statue is most impressive and is surrounded by a series of bronze sculptured reliefs at the base depicting good old Díchu and Saint Tassach, among others, all with inscriptions in Irish using the old script. Down Museum at Downpatrick has acquired a photograph album of the 1930s celebrations for Saint Patrick showing people dressed up in all sorts of wonderful 'Celtic' costumes, complete with false beards and wooden staffs. There is an official pilgrimage to Slieve Patrick in June, whilst it is a mere walk in the park compared with Croagh Patrick, it is still possible to have a sense of the penitential pilgrimage as you climb, and the views from the summit are truly spectacular. The picture below shows the small statue that greets the pilgrims as they enter the site, the large statue can be seen in the postcard at the top of the page: 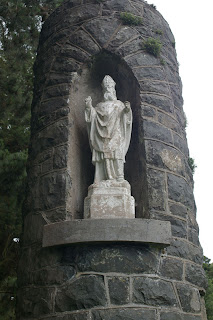 It was a strange feeling driving around the roads of the Lecale District that one was following in the footsteps of Saint Patrick and some of the earliest Christians in the north. As you can see below, it is certainly a beautiful as well as a sacred landscape. 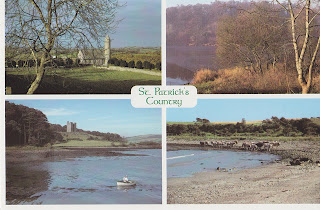 It was wonderful to have a sense of the real Saint Patrick, far removed from the packaged heritage or the secularized razzamatazz of the 17th March. As my holiday reading included Lisa Bitel's book Isle of the Saints: Monastic Settlement and Christian Community in Early Ireland, it certainly put some of her comments on the relationship between the early saints/monks and the environment they chose for their foundations into focus.