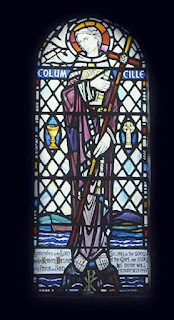 Now there never was born to the Gael offspring nobler, not wiser, nor of better kin, than Colombcille. There hath not come of them another who was meeker, or humbler, or lowlier. Surely it was great lowliness in Colombcille that he himself used to take off his monks' sandals and wash their feet for them. He it was that often carried his quota of corn on his back to the mill, and ground and brought it home to his house. He it was that never put flax not wool against his skin. He it was that slept not until his side came against the bare mould: nought was under his head save a pillar-stone for a bolster. And he slept only so long as Diarmait his fosterling used to be chanting three chapters of the Beatus. He would rise up after that, and would cry and beat his hands together like a loving mother lamenting her only son. He would chant thrice fifty (psalms) after that, till morning in the sand of the strand, ut dixit poeta—

The three fifties—sore the watching—in the night—great was the pain.
In the sea beside Scotland before the sun had risen,
Clear ... in the sand, it was great labour,
The trace of his ribs through his raiment was manifest when the wind blew.

That was his nightwork. In the daytime he attended to the canonical hours: he offered Christ's Body and his Blood: he preached his gospel: he baptized: he consecrated: he anointed; he healed lepers and the blind and lame and folk of every disease besides: he raised the dead to life.

Now when Colombcille drew nigh to his ending days, and when the bell for nocturn was struck on the night of Pentecost Sunday, he fared before the rest to the church, and knelt and made fervent prayer at the altar. At that moment an angelic radiance filled the church around him from every side, and then the venerable elder sent forth his spirit to heaven in delight and in joyance of heaven's household altogether.

His body is here on earth in honour and veneration from God and menfolk, with daily marvels and miracles; and, though great is his honour at present, greater will it be at the Assembly of Doom, when like an unsullied sun shall shine the ... of his body and soul.

There shall he have that great glory and elevation: in union with nine orders of heaven that have not transgressed; in union with apostles and disciples of Jesus Christ; in union with the Godhead and Manhood of God's Son; in union that is noblest of all unions, union with the Holy Trinity, noble, venerable, almighty, Father, Son and Holy Ghost.