Saint Brigid: Her Work and her Memory 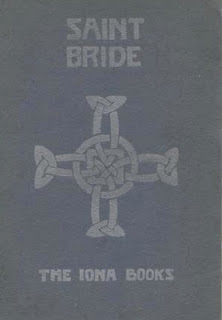 To mark the octave day of the Feast of Saint Brigid, below is a tribute to her work and her memory taken from a 1913 publication by the Edinburgh firm T.N. Foulis as part of their 'Iona books' series. The volume has a simple paperback cover decorated with a interlacing cross in silver and hand cut paper pages. It is very much a product of the Celtic revival and reflects the romanticism of the movement and the conviction that a barely-disguised paganism lay just beneath the surface of early Irish Christianity. In this extract, however, the author, James Wilkie, who was a solicitor and antiquary from Leven in Fife, looks at what Saint Brigid's feminine touch brought to the Church:

More enduring than any shrine, however splendid, is the work accomplished by holy Bridget of Kildare and the fragrant memory she left behind. Beyond the glamour of legend that has gathered round her, as round all earth's greatest in the course of ages, the most critical eye can discern a life spent after the image of Him she served, according to the light that was given to her: healing the sick, caring for the afflicted in mind, body or estate, shrinking from no peril or loathsome disease, succouring lepers even as in our time Father Damien gave all for them, loving too and caring, like the Blessed St Francis of Assisi, for the humble creatures of field and forest and for the birds of the air, setting the example of holy living and serene dying, worthily carrying into other spheres the work St Patrick began, adding a white radiance to the lustre of the Isle of Saints and sending Christ's Evangel into rude Pictavia many years before the coracle of Good Colum Cille was beached on the green pebbles of the Port-na-Curaich. Kings and Saints sought her counsel, and her influence was potent in the political as well as the spiritual destinies of these islands. She stands out, as Olden has said, "the first woman engaged permanently in the work of the Church", a remark certainly true of the Church of her native land. Into it she must have carried some touch of a gentler and more pitying hand, some finer intuition, some tenderer sympathy. She deepened in a rude age that reverence of man for woman which the adoration of the Blessed Mother of Our Lord brought to the ideals of Chivalry. Within her Religious Houses learning flourished, though what part she had in it and in the encouragement of art we cannot now say with certitude. Yet she had been other than she was had she not realised that He who made the earth so fair must be worshipped in beauty, as well as in spirit and in truth: that no glory of colour, no wealth of adornment, no rhapsody of music, no fragrance of incense were too rare to be offered to Him before whose majesty the angels veil their faces and who yet on His Mother's knee received gifts of gold and frankincense and myrrh. The very fact that in the Celtic mind she is confused or identified with the goddess of the Danaans, the patroness of learning and poetry, of music and all the arts, bears witness to her encouragement of these.