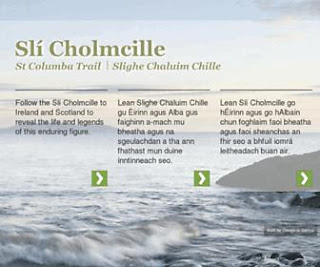 Slí Cholmcille is a very useful online resource on the places in Ireland and Scotland associated with Saint Colum Cille. Here's a description from the website:

Slí means ‘way’, and Slí Cholmcille explores the language and heritage of Ireland and Scotland through the life of Colmcille or St Columba. It is a trail between Ireland and Scotland and between many sites associated with the saint and his followers; it links Gaelic-speaking communities in the two countries.

Slí Cholmcille is the result of connections made over a number of years and of input from many parties. It is hoped that the connections will grow and flourish in years to come. The project has been developed by Colmcille (www.colmcille.net), an initiative named after the saint. It was set up to promote links between Irish and Scottish Gaelic in 1997, a year which saw commemorations of the 1400th anniversary of the death of the Colmcille or St Columba. It is now a partnership between Foras na Gaeilge, which promotes the Irish Language in the island of Ireland, and Bòrd na Gàidhlig which promotes Scottish Gaelic in Scotland and internationally.

The site provides an opportunity to make a virtual visit to the places associated with the saint and has many links for further information. In addition to the Irish and Scottish Gaelic language organizations involved, some leading scholars in the field of Columban studies, both Irish and Scottish, help to provide an overview of Saint Colum Cille and his times.

Slí Cholmcille is well worth a visit and can be found here.