Ireland's Patrons and the Norman Conquerers

In his magnum opus, The Monks of the West, the 19th-century Anglo-French writer, the Comte de Montalembert, records this popular account of how Saints Brigid and Columba treated the Norman conquerors of Ireland. I have posted a short essay on the coming of the Normans to Ireland at my other blog here. The Norman reputation for haughty arrogance towards those they conquered is firmly established in the popular mind, as anyone who has ever read the stories of Robin Hood must agree. Inevitably, like the Vikings, the Normans are now the subject of some historical revisionism. I suppose I will have to declare an interest here since I myself bear the surname of one of the Norman families who came to Ulster in 1177 with John de Courcy. I am thus glad that de Courcy, whatever his motives, did the right thing by the Irish saints, unlike his countryman Strongbow. Saints Brigid and Colum Cille are pillars of charity, but it doesn't pay to get on the wrong side of them. The image of Saint Brigid waiting to pierce the heart of the proud Norman conqueror on his deathbed is certainly one to conjure with... 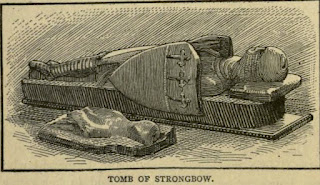 It is to Columba that the oppressed and impoverished Irish seem to have appealed with the greatest confidence in the first English conquest in the twelfth century. The conquerors themselves feared him, not without reason, for they had learned to know his vengeance. John de Courcy, a warlike Anglo-Norman baron, he who was called the Conqueror (Conquestor) of Ulster, as William of Normandy of England, carried always with him the volume of Columba's prophecies; and when the bodies of the three saints were found in his new possessions in 1180, he prayed the Holy See to celebrate their translation by the appointment of a solemn festival. Richard Strongbow, the famous Earl of Pembroke, who had been the first chief of the invasion, died of an ulcer in the foot which had been inflicted upon him, according to the Irish narrative, at the prayer of St. Bridget, St. Columba, and other saints, whose churches he had destroyed. He himself said, when at the point of death, that he saw the sweet and noble Bridget lift her arm to pierce him to the heart. Hugh de Lacy, another Anglo-Norman chief of great lineage, perished at Durrow, "by the vengeance of Columb-cille," says a chronicler, while he was engaged in building a castle to the injury of the abbey which Columba had founded, and loved so much. A century after, this vengeance was still popularly dreaded; and some English pirates, who had pillaged his church in the island of Inchcolm, having sunk like lead in sight of land, their countrymen said that he should be called, not St. Columba, but St. Quhalme — that is to say, the saint of Sudden Death.

[de Montalembert explains in a footnote that Quhalme was the Anglo-Saxon word for sudden death, from whence the English word 'qualm'.]