Hibernia Appeals to Christ and Saints Brigid and Patrick

Here is an interesting painting which illustrates the part played by the Irish patron saints in the nationalist movement of the 19th century, which I came across while browsing the archives of Whyte's Irish Art Auctions. The main interest for me is the depiction of both of Ireland's patrons, male and female, and the fact that our tertiary patron, Saint Columcille is absent. I can't help noticing too that Saint Brigid is to the fore! From the story attached to the painting, it sounds as if the intercession of the Irish patron saints was certainly needed in the Paris of 1871: 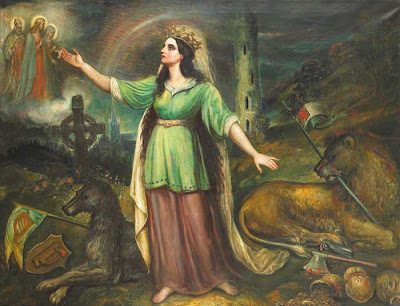 ALLEGORY OF HIBERNIA APPEALING TO CHRIST AND SAINTS BRIGID AND PATRICK, circa 1864

oil on canvas  88 by 113cm., 34.5 by 44.5in.    Joseph McDonnell, ‘From Bernini to Celtic Revival: A Tale of Two Irish Colleges in Paris’, Irish Arts Review Yearbook, Vol. 18, 2002, p. 173, fig. 6.  This is large scale modello for a painting commissioned by Canon Charles Ouin Lacroix for the Irish College in Paris. A native of Rouen, Canon Ouin Lacroix was professor of French at the college from 1850 onwards and appointed administrator in 1859. He was the author of several books including a history of the church of St Geneviève, illustrated by Frederic Legrip, who was also from Rouen. In the early 1860s the Canon invited Legrip to paint a series of works for the college, mostly of a devotional nature. He also produced a striking large allegorical composition depicting Hibernia turning from the symbols of British repression (an axe, pincers and bags overflowing with money made from Irish soil and labour), towards Catholicism, as represented by the vision of Christ flanked by Saints Patrick and Brigid. In both the Irish College composition and the present work, Ireland’s history of Christianity is represented by the Celtic cross, the church and the round tower. The present work differs in the inclusion of an Irish wolfhound; the figure of Hibernia is also arguably better realised in this, the smaller version. Joseph McDonnell has related how, in 1871, the Canon used this image of Irish nationalism to save his college from vengeful mobs during the desperate days of the Paris Commune: “Canon Ouin Lacroix suddenly found himself cornered by a fanatical group of Communards who had gained access to the Irish College. The Canon pleaded that the College was foreign property and dramatically turning to the Legrip paintings behind him, he ingeniously informed the Communards that they represented the Irish as the enemies of the British and that they showed the young students ready to join up alongside the French to fight the English armies. The Canon’s powers of persuasion must have been formidable as the Communards departed, leaving the College unharmed. Yet all the while the Union Jack flew over the main entrance of the building” (2002, p. 173). With the frame maker’s label of O’Connor & Co., 123 George’s Street, on reverse.