The Story Brought by Brigit: An Irish Passion Play 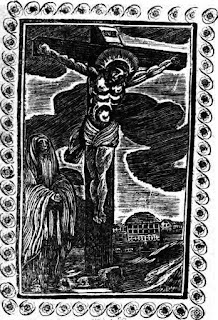 The Story Brought by Brigit is the title of a play by Augusta, Lady Gregory (1852-1932), one of the leading lights in the Celtic revival of the nineteenth and early twentieth centuries. Although born into the Anglo-Irish aristocracy, Lady Gregory wholeheartedly embraced the nationalist revival movement and was an important contributor to its literary output. She published a number of volumes drawing on the traditions of the Irish-speaking peasantry who lived in the County Galway estates owned by her husband, Sir William Gregory. The books presented the 'Kiltartan' view of Irish history and culture in the distinctive Hiberno-English of the west of Ireland. Among the legends which Lady Gregory recorded were a number of Irish traditions which linked Saint Brigid with the early life of Christ. Thus in one story, the Holy Family is miraculously brought to Ireland rather than Egypt as a place of refuge from the murderous King Herod and in another, Saint Brigid is miraculously transported to Bethlehem and acts as a midwife during Christ's birth. It was to these traditions that Lady Gregory returned in her 1923 play on the Passion of Christ. In The Story Brought by Brigit, she introduced a rather neat twist on the legends which associated the Irish saint with the beginning of Christ's earthly life by having her also present at its end. Ignoring, as the legends did, the chronological impossibility of having a 5th-century Irishwoman present at events which had occurred several hundred years before her own birth, the play's Saint Brigid once again finds herself in Christ's homeland, where fortunately, everyone seems to speak the dialect of Kiltartan! In Act 1, the newly-arrived Saint Brigid explains to some of the Jerusalem locals the reason for her long journey:

St Brigit: It was in a dream or a vision of the night I saw a Young Man having wounds on him. And I knew him to be One I had helped and fostered, and he a Child in his mother's arms. And it was showed me in my dream there would trouble come on him but in the end he would put gladness in the heart of His friends. And it was showed to me that the place where I would find him would be in this country of Judea, a long, long way to the east.

The locals invite Saint Brigid to join them in awaiting the arrival of the Master and the greetings bestowed have a distinctive Irish flavour:

(Christ appears. He is followed by St. John and a crowd. The women stand aside.)
1st Woman: May God enable you!
3rd Woman: All the luck in the world to you!
2nd Woman: God bless every hair of his head!
St. Brigit: Why would we not shout for him that is more than any earthly King!

The joy is quickly turned to fear as word spreads that Christ has been arrested and Saint Brigid's new friends are eager for news:

3rd Woman: Here is that Saint of the Gael coming, that some call the fostermother of Christ. She might have some tidings. (To St. Brigit) Where were you through the night time?
St. Brigit: I was with the Mother of our Lord.
1st Woman: And what way is she? This trouble must lie very heavy on her.
St. Brigit: It is as if it was foreshadowed to her from the beginning. It is a long time there has been a shadow across her heart.

Saint Brigid joins the women of Jerusalem as they witness the road to Calvary and one remarks to her:

2nd Woman: You did well coming here to see him with your own eyes. For this is a story will have seven shapes put on it.
1st Woman: Indeed it is a heart-broken story you will have to bring back to Ireland.
St. Brigit: No; but a great story and a great praise I will bring with me. I have heard him myself, and know that this is indeed the Christ, the Saviour of the world.

In a final example of Kiltartan meets Jerusalem, Saint Brigid and the women join in a traditional Irish keen, in the style of the Caoineadh Na dTri Muire (Lament of the Three Marys). The play, however, ends with the knowledge of the Resurrection and Saint Brigid's prayer 'that God may bring us to the same joy his blessed soul returned to!'

Perhaps on another occasion I can return to this play and discuss it more critically, as there is much more to say of this Irish Passion Play. The text I used here was that published in The Collected Plays of Lady Gregory 3 - Wonder and Supernatural Plays edited by Ann Saddlemyer.