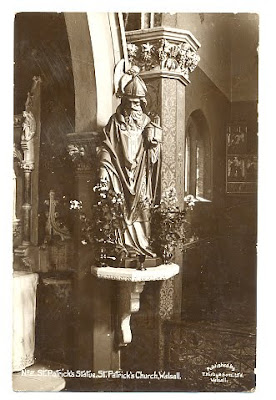 This means, not the day, on which St. Patrick himself was baptized but the day on which he baptized his first convert. It seems to have been celebrated, from a very remote period, since it occurs, in the "Felire" of St. Aengus, on the 5th day of April. From the commentary appended, we learn, that "The first baptism of Patrick" means how Sinell, the son of Finnchadh, of the Ui Garchon, was the first person baptized in Ireland, by Patrick. On the 5th of April in the Martyrology of Tallagh we find entered Baptisma Patricii venit ad Hiberniam, i.e. "the Baptism of Patrick came to Ireland." The remarkable event of St. Patrick regenerating, in the saving waters of Baptism his first Irish convert, is recorded, likewise, in the Martyrology of Donegal and, in reference to it, the "Feilire" of St. Aengus is quoted :—

" On the great festival of the son of Cula,
Of Becan with the victory of austerity,
The first baptism of Patrick
Which he performed in Erinn."

The Bollandists merely notice this Feast. The Martyrology of Tallagh records, at this date, Ordinatio Patricii. Whether this entry, meaning, "the Ordination of St. Patrick," refers to his sacredotal ordination, or to his Episcopal consecration, cannot be exactly determined. It is probable, however, it must be coupled with the latter, as more in accordance with ecclesiastical usage.

Even at the present time, it is customary, to commemorate the anniversary of a Bishop's consecration, by a prayer, added to the Mass, offered on that day, within his own diocese. In the published Martyrology of Donegal, the editor remarks in a note: The more recent hand adds here,'Ordinatio S. Patricii, Mart. Taml,' as if it were deemed by the writer a matter of importance, to supply an obvious omission of the compilers.