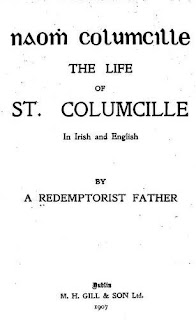 During the four extra years of life granted to Saint Colum Cille he exercised his gift of prophecy to the full, including the sight of people passing from this world to the next:

THE FOUR YEARS BEFORE HIS DEATH.

During these four years Columcille was wrapt up in the contemplation of God and heavenly things, and he saw many wonderful things.

He exclaimed one day: “I see the soul of Columbanus, the smith, ascending to heaven in the company of the angels! He merited heaven by the labour of his hands and his charity to the poor.”

On another occasion he exclaimed in a transport: “O happy woman! O, happy woman! The angels carry your soul to heaven in reward of your virtues.” And after a year Columcille was again heard to say: “I see the soul of that blessed woman coming down from heaven to meet the soul of her husband at death’s hour. See! she is helping the angels to fight the demons who are striving to gain possession of his soul. They have failed! The soul is saved!”

He saw the soul of St. Brendan, of Birr, going up to heaven in great glory. Such was the splendour of Brendan’s soul that Columcille saw that it illuminated the whole world. He directed his monks to celebrate a solemn High Mass to thank God for Brendan’s happiness.

He said a Mass of Thanksgiving for the happy death of the holy Bishop Coleman; and he also saw his soul ascend gloriously to heaven.

St. Columcille was indeed another St. John in his Island of Patmos, and God revealed to him in Iona many wonderful things about this world and the world to come.