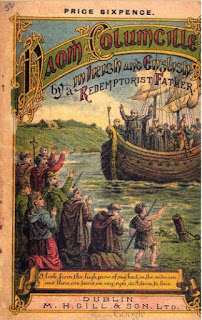 I recently checked in with the Internet Archive to see if they had brought any fresh materials on the Irish saints into the public domain and was rewarded with a Life of Saint Columba published in 1907 by an Irish Redemptorist priest. The text was issued in both Irish and English on facing pages, the Archive attributes the Irish text to Micheál O'Floinn.  Our anonymous Redemptorist starts by setting out his attitude to hagiography, coming down firmly on its side rather than that of history. He was, of course, writing in 1907 just after the Bollandist Father Delehaye published his critical approach to the study of the saints in the seminal work The Legends of the Saints. Delehaye himself was aware of the tensions his modernist scholarship raised for those who had a less critical approach to the saints for as he relates:


One of my first copies of The Legends of the Saints had a reception I was far from expecting. The friend who had recieved the complimentary copy informed me that he would put it in his library, but that he would never read it. "What do you expect?", he said, "I love the legends of the saints, and I do not want anything to spoil my pleasure in them".

It's a sentiment our Irish Redemptorist would have understood and indeed it's one I am aware of myself. So one hundred and ten years on from the publication of this bilingual Life of Saint Columba I intend to bring a selection of episodes drawn from the hagiography of Saint Colum Cille used in the book to celebrate the feast until the octave day. And to unashamedly enjoy them!


A Foreword to my Readers.

THE Life of this great Saint is not written in a way to recommend it to many whose opinions lead in certain literary circles to-day, I offer no apology. “ Let every man abound in his own sense.”

History is written in two ways. Both have their merits and their faults. The one, with a kindly trust in the honesty of those who have gone before, accepts his authorities as he finds them, and so shapes his tale — this I have done. The other sifts and sifts to find out what he calls the exact truth, acting in the process as if witnesses were more likely to be telling lies than truth. As a result he presents often dry and not too sweet-smelling bones which he calls history, overlooking the fact that in the telling of his tale he may be as much the victim of preconceived ideas as the mediaeval chronicler he laughs to scorn.

But is not my plan a-playing fast and loose with truth if I do not think so. What comes from the past you may call legends if you will, but in the old sense of the word “legenda,” things to be read. Read, then, dear reader, my story of Columcille. All that is here written may or may not be well founded, yet those who handed us down these accounts were as worthy of credence as the men who to-day laugh at what they are pleased to call childish credulity.

No doubt the miraculous will figure largely in this little book, but not too largely for those who believe that “God is wonderful in His saints”.

We present the Life of St. Columcille in Irish to the Gaels of Ireland and Scotland, in English to the Saxons. He laboured much for Gael and Scot and Saxon, and loved them well. May this Life help them to know and love him.

The truly marvellous success of “Naomh Pádraig” gives me, indeed, good hope that “Naomh Columcille,” too, will make our Saint better known and better loved.

The Life of Saint Columcille in In Irish and English by a Redemptorist Father (Dublin, 1907).