December 7 sees the commemoration on some of the Irish calendars of the birth of Saint Colum Cille (Columba). The Martyrology of Gorman records for this day:

The nativity of chaste, dear-white Colomb, the festival of Buite the fair and vigorous.

while the later Martyrology of Donegal simply records 'The Birth of Colum Cille' in its entry for December 7.

In his 1857 edition of Adamanan's Life of Columba, the Irish Anglican Bishop, William Reeves, commented:

St. Columba was born at Gartan, a wild district in the county of Donegal, on the very day that St. Buite, the founder of Monasterboice, departed this life. Thus the 7th of December is determined for an event, the date of which might otherwise have been unrecorded. Authorities vary as to the year, ranging from 518 to 523; but calculation from Adamnan's data gives 521 as that most likely to be the true period.

Gartan. The earliest authority for St. Columba's birth-place is probably the statement in the old Irish Life: 'Gartan, now, is the name of the place in which he was born.' O'Donnell and the Calendar of Donegal cite the alleged lines of St. Mura :

'He was born at Gartan by his consent;
And he was nursed at Cill-mic-Neoin ;
And the son of goodness was baptized,
At Tulach Dubhglaise of God.'

None of the Latin Lives make any reference to the place of his birth. Local tradition, however, is very decided in confirmation of the Irish account.

Seventh of December. The Irish Life adds: 'on Thursday, of the week-days.' This will give the choice of 517 and 523 for his birth: for, Dec. 7 is e, therefore, it being Thursday, A is the Sunday letter, which belongs to the above years.

The later life of Saint Colum Cille, written by the 16th-century Donegal prince Manus O'Donnell, records a number of the traditions associated with the birth of the saint. These include prophecies and visions, but also some very tangible relics: 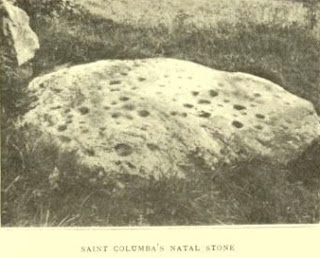 51. On a time Ethne the mother of Columcille was in the place that is called Gartan, and it was the night before Columcille was born, and there appeared a fair youth in shining raiment, and he said she should bring forth on the morrow the son that was promised her to bear. And he told her there was a broad flagstone in the lake, to the south of the place where she was, and that is today called Loch mic Ciabain. And he told her to let bring that flagstone to a certain place called Raith Cno and that thereon should God will the child to be brought forth of her.

"In what manner shall I get the flagstone, seeing it is under the lake," saith she, "or whereby shall I know it from other flagstones?"

"Thou shalt find it floating on the bosom of the lake," saith he.

And Ethne found the flagstone on the morrow as it had been told her, and she let bring it from the foresaid place. And albeit it floated on the surface of the lake, and Ethne's folk brought it away with them with out labour, certain it is that it were a task for thirty men to bring it from the lake to the place where it is to-day.

And when the sickness of childbirth came upon Ethne, she went to a lonely valley hard by a little stream. And she sat down in a certain spot there, and in that place she left some of the blood that is wont to come before the child.

And not finer and not whiter is flour than the clay that is found there. And whoso eateth or bringeth with him of that clay is never burned nor drowned, nor may he be killed by one cast that day till night. Nor shall he get a death without priest. And every woman in pangs of childbirth that eateth thereof is helped forthwith. And whoso putteth thereof on his tongue the first day that a fever seizeth him, there is no bitter taste in his mouth from that time the while the fever lasteth. And it is its nature to heal every distemper. And it must be that one of the natives of this place, to wit, Gartan, should dig this clay to bestow on all, for men say a stranger once went to dig it, and it fled from him and entered the heart of a tree or a great big trunk fast by, nor was it found again in its own place until holy water was sprinkled there on and it was blessed.

Then went Ethne thence to the place where she brought forth Columcille, the time when the age of our Lord was five hundred and twenty years.

52. In Gartan, in sooth, in Cenel Conaill Gulban, Columbcille was born. And Raith Cno is the name of the very spot in Gartan where he was brought forth, on the seventh day of December. And it befell that the foresaid flagstone was under him at his birth, and the child rested him crosswise thereon, and the flagstone opened for him in such wise that it left a place for him therein. And the figure of that cross is in that stone from that time to this day. And that flagstone remaineth in that place for working of marvels and wonders. And his mother brought forth a round stone of the color of blood along with him and it is called the Red Stone. And he left that stone in Gartan to work marvels and wonders ; and it doth not take a covering of gold nor of silver, albeit men have oft endeavored to cover it, but a case of silver or of gold it suffereth.