December 13 is the feast of Saint Lucy of Syracuse, an early virgin martyr whose feastday is still celebrated in Lutheran Sweden. There is a good illustrated summary of the Swedish celebration of Saint Lucy here. According to a modern scholar of Irish folklore, the cult of Saint Lucy may have directly influenced the cult of our own Saint Brigid, both in the use of the hagiographical motif of the plucking out of the eyes and in some of the ways in which Saint Brigid's day was celebrated in popular culture. Dr Dáithí Ó hÓgain writes:

Narratives of Brighid were developed through medieval times by further additions from Continental hagiography. A ninth-century text describes how a man comes to woo the young, and as yet unprofessed, Brighid. Her stepbrothers try to compel her to accept the marriage, but she knocks out one of her eyes so as not to be attractive to the suitor. When the family allow her to remain a virgin she miraculously restores sight to herself. The story is repeated in later sources, and it survived in the recent folklore of north Leinster and south Ulster. The name of the suitor, Dubhthach mac Lughair, is borrowed from the early Patrician texts, and it is obvious that the story cannot be older than the eighth century. It was, in fact, taken from the lore of the continental saint Lucy and was suggested by the symbolism of light associated with both of these holy virgins. It is apparent that the cult of Lucy influenced that of Brighid in other ways also in medieval times. Lucy's feastday, December 13, coincided with the winter solstice in the old calendar and was thus seen to usher in the lengthening of daylight. In Irish the saying which refers to Brighid's feastday, February 1, is that 'from Brighid's feastday onwards the day gets longer and the night shorter', although in fact that change occurs from the winter solstice, and the presumption must be that this saying was in origin a rather inaccurate borrowing from the Lucy lore. It could well be, also, that some of the paraphernalia associated with the feast of Brighid in Irish folk life - such as processions of young girls with the leader dressed up as the saint - shows the influence of the Lucy cult, which was very popular in western European countries in the Middle Ages. 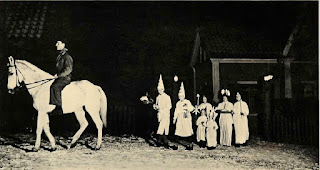 Something else which struck me as I looked at the picture above of a celebration of Saint Lucy's Day in Sweden in 1943, was that the round headdress of candles worn by the young girl representing the saint has echoes of another tradition associated with Saint Brigid - her connection with the feast of Candlemas:

In further reference to the spring feature of Saint Brigid I am indebted to Miss Delap for a curious legend from Valentia Island which, with fine disregard of chronology, makes Saint Brigid a friend of the Virgin Mary. It is said that when the Virgin was shy about facing the congregation in the Temple, Saint Brigid procured a harrow, took out the spikes and putting a candle in every hole, placed it on her head, walked up before the Virgin and escorted her down again. According to another version, which it is believed came from the north of Ireland, it was a hoop with lighted candles which the Saint wore as she danced up the aisle before the Virgin and down again. For this service Saint Brigid’s Day is the eve of Candlemas or the Purification of the Virgin.

I don't know if the 'hoop with lighted candles' is also borrowed from the Saint Lucy tradition, but in view of what Dr Ó hÓgain has said, it seems to me an interesting coincidence.