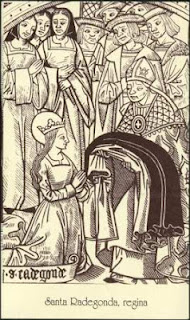 One of the saints most closely linked with the Veneration of The Cross is the Merovingian princess, Radegund of Poitiers. Reading the entry at Pilgrim on the saint's feast day prompted me to dig out the notes I had made from a paper by Walter Berschin on 'Radegundis and Brigit', in which the author explores the possiblility that Cogitosus, author of the Vita Secunda S. Brigidae, may have been acquainted with the late sixth-century Vita S. Radegundis of Venantius Fortunatus. Venantius, the first 'professional hagiographer' of Latin literature, wrote his Life of Radegund shortly after the saint's repose in the year 587. The biography of Cogitosus, on the other hand, was one of a group which came out of Ireland a century later, when lives of all three of Ireland's patrons - Patrick, Brigid and Columcille - were written in Latin. Whilst the chronology of these lives is still the subject of debate, Muirchú, author of a life of Saint Patrick, acknowledges his spiritual father, Cogitosus, as having pioneered the way for him. Berschin suggests that despite the great differences between the Life of Brigit and that of Radegund, there is a coincidence which leads him to wonder if the Irishman Cogitosus was aware of the work of Venantius. One of the similarities between the two Vitae is that neither records the actual death of the saint, Cogitosus instead giving a description of the monastery at Kildare and Brigit's continuing presence there by her working of miracles post mortem, just as Venantius does not conclude his Life of Radegund with an account of her death but of one of the many miracles she worked after leaving this world. Indeed, in his presentation of the Life of Saint Brigid as a 'rapid series of miracles', Cogitosus may well have been imitating the 'narrative technique developed by Venantius Fortunatus, who was the Merovingian master of biography'. But the differences are also there:

Radegundis is a saint living under the spell of the Cross. Indeed, the Veneration of the Holy Cross has evoked Radegundis's story throughout fifteen centuries and, for as long as Pange, lingua gloriosi proelium certaminis and Vexilla regis prodeunt, fulget crucis mysterium are sung, it will continue to do so. These two poems were composed by Venantius Fortunatus for Radegundis and her nuns in honour of the Holy Cross venerated by them. In the last stanza of Vexilla regis, in the lines Salue ara, salue uictima de passionis gloria, we find the most succinct summary of Radegundis's career, her 'glory of passion'.

The Holy Cross is almost absent from Brigit's Life, as are mortification and asceticism. How are we to form an impression of Brigit's monastery? Was she an abbess? Was she, who is so often sitting in her carriage (in curru sedebat) not subject to stabilitas in congregatione? Do we encounter something Celtic in the fascination with her carriage? Celtic princes on the Continent even took their carriages with them to their graves. Cogitosus's Brigit seems to live in an archaic world, surrounded by animals, 'praising the invisible Creator of everything through his visible creation, the Creator to whom the animals are subject and for whom they live'.

In saying that 'The Holy Cross is almost absent from Brigit's Life, as are mortification and asceticism', the author is, of course, speaking only of the written Life of Cogitosus and not Saint Brigit's actual life. As an Irish monastic, asceticism was very much a part of her life, some of the other sources record, for example, that she practiced the discipline of being immersed overnight in cold water as she prayed. And, she is associated with her very own distinctive cross, which still remains a feature of Irish life to this day. I will leave the last word to an Englishwoman who loved the patroness of Ireland:

Her religious work comes close on the heels of Patrick; she was one of the many who consolidated the structure he had brought into being. And Brigit's more intimate, feminine, touch probably meant a great deal at that time to the infant Celtic Church: if Patrick the British stranger had spread the Faith far and wide over Ireland it remained for Brigit, the Irishwoman, to really take it into the homes of her fellow countrymen and weave it, like the strands of the rush crosses, into the pattern of their lives.