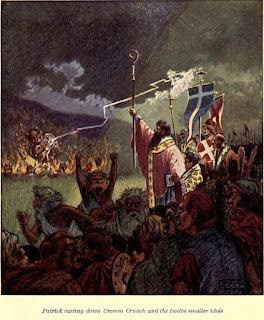 Alongside the work of religious writers like Canon O'Hanlon and his work on the saints, there were also secular writers working on the preservation of native Irish folklore. The nineteenth-century saw the move away from the countryside to cities, from the farm to the factory and from the use of the Irish language to English. The mainly middle-class people who were involved in the national revival movement set themselves the task of trying to record and preserve aspects of the vanishing Gaelic, rural culture before it was too late. One of the staunchest labourers in this field was the man who went on to become the first President of Ireland, Douglas Hyde (1860-1949). Hyde was the son of an Anglican rector in County Sligo and became fascinated by hearing local people speak the Irish language. He mastered the language himself and under the pen name 'An Craoibhín Aoibhinn' ("the dear little branch") became a prolific contributor of poetry and articles to the journals of various Irish language preservation societies before becoming one of the founders in 1893 of Conradh na Gaeilge, the Gaelic League. Hyde published a number of collections of poems, prayers and stories collected from the Connemara Gaeltacht, and below is his account of the legend of Saint Patrick and Crom Dubh, complete with his own introduction to the tale:

This legend, told by Michael Mac Ruaidhri of Ballycastle, Co. Mayo, is evidently a confused reminiscence of Crom Cruach, the great pagan idol which was overthrown by St. Patrick. [1] Though Crom appears as a man in this story, yet the remark that the people thought he was the lord of light and darkness and of the seasons is evidently due to his once supposed Godhead. The fire, too, which he is said to have kept burning may be the reminiscence of a sacrificial fire.

From a letter written to Sir Samuel Ferguson [2] by the late Brian O'Looney, concerning Mount Callan in the Co. Clare, we see that this legend of Crom was widely circulated.

" Domnach Lunasa or Lammas Sunday," says O'Looney,"the first Sunday of the month of August was the first fruits' day, and a great day on Buaile-na-greine. On Lammas Sunday, called Domnach Crom Dubh, and anglicised Garland Sunday, every householder was supposed to feast his family and household on the first fruits, and the farmer who failed to provide his people with new potatoes, new bacon and white cabbage on that day was called a felemuir gaoithe, or wind farmer; and if a man dug new potatoes before Crom Dubh's day he was considered a needy man..... The assemblage of this day was called comthineol Chruim Dhuibh, or the congregation or gathering of Crom Dubh, and the day is called from him Domnach Chrom Dubh, or Crom Dubh's Sunday, now called Garland Sunday by the English-speaking portion of the people of the surrounding districts. This name is supposed to have been derived from the practise of strewing garlands of flowers on the festive mound [on Mount Callan] on this day, as homage to Crom Dubh hence the name Garland Sunday. Assuredly I saw blossoms and flowers deposited upon it on the first Sunday of August, 1844, and put some upon it myself, as I saw done by those who were with me…

If you ask me who Crom Dubh was, I can only tell you I asked the question myself on the spot. I was told that Crom was a god and that Dubh or Dua meant a sacrifice, which in combination made Crom Dubh, or Crom Dua, that is, Crom's Sacrifice; and this Sunday was set apart for the feast and commemoration of this Crom Dubh, whoever he may have been."

It is interesting to find O'Looney's old-time experiences in Co. Clare so far borne out by this legend from North Mayo.

The name Teideach given to Crom's son, is, as Mr. Lloyd acutely points out, founded upon a misunderstanding of the name of the hole which must have been "poll an t séidte," the puffing or blowing hole. Downpatrick, where these events are supposed to have taken place, is at the extreme northern extremity of Tyrawley, Co. Mayo, and all the other places are in its neighbourhood.

1. Lower means "northern". It means round the Lagan, Creevagh and Ballycastle.
2. Literally "doggish". The meaning is rather "snarling" or "fierce" than cynical.
3. Pronounced like "Cunn eetir" and means —hound of rage?
4. Pronounced like "sy-ha soory" and means —bitch of wickedness?
5. Linnaun shee, a fairy sweetheart; in Irish spelt "leannán sidhe."
6. Rather "the space between the toes."
7. A variant of "it was well, my dear."
8. Apparently tell it with your complaint added to it.

Legends of Saints & Sinners Collected and Translated from the Irish by Douglas Hyde LL.D. D.LITT. (Dublin and London, 1915), 1-11.